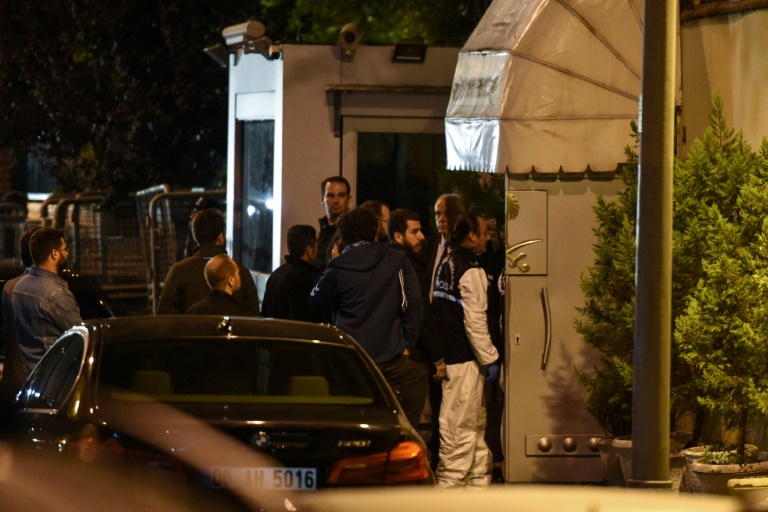 Turkish police on Monday searched the Saudi consulate in Istanbul for the first time since journalist Jamal Khashoggi went missing, as US President Donald Trump floated the idea that “rogue killers” could be to blame for his disappearance.

Khashoggi, a Saudi national and US resident who became increasingly critical of powerful Crown Prince Mohammed bin Salman, has not been seen since he walked into the Istanbul consulate to sort out marriage paperwork on October 2.

Turkish officials have said they believe he was killed — a claim Saudi Arabia has denied — with the controversy dealing a huge blow to the kingdom’s image and efforts by its youthful crown prince to showcase a reform drive.

Trump despatched Secretary of State Mike Pompeo to the kingdom for what the State Department described as “face to face meetings with the Saudi leadership” to find out what happened.

Until now, Riyadh has not allowed Turkish investigators to search the consulate — officially Saudi territory — with reports both sides were at odds over the conditions.

But late Monday evening — after Turkish authorities placed high iron barriers in front of the consulate — a motorcade of six cars drew up and Turkish police and prosecutors entered the premises.

Some police were in uniform while other officials were in suits carrying printers and files, an AFP correspondent said.

Dozens of media organisations — some of whom had set up tents — have kept a constant vigil outside the consulate in the expectation that the search would finally begin.

A Saudi delegation had entered the consulate one hour before the Turkish police arrived and appeared still to be inside as the search was conducted.

Trump’s comments came after a telephone conversation with King Salman, father of the crown prince, the first such talks since the crisis erupted.

“Just spoke to the King of Saudi Arabia who denies any knowledge of whatever may have happened ‘to our Saudi Arabian citizen’,” Trump tweeted.

Riyadh’s most recent comments have focused on having no knowledge of any killing or denying any such order had been given.

“The denial was very, very strong,” Trump later told reporters at the White House. “It sounded to me like maybe these could have been rogue killers. Who knows?”

The search came after Turkish President Recep Tayyip Erdogan and King Salman also had their first telephone talks since the controversy erupted, in what appeared to be a conciliatory conversation according to official readouts.

While lurid claims have appeared in Turkish media — including that Khashoggi was tortured and dismembered — Turkey’s leadership has so far refrained from pointing the finger directly at Riyadh in public comments.

King Salman emphasised the importance of the Turkey-Saudi relationship and said no-one should be able to “undermine the strength of this relationship,” Saudi’s official media reported.

The controversy has troubled Saudi’s traditional Western allies — who are key arms suppliers to the kingdom — and also undermined efforts by Mohammed bin Salman to present himself as a modernising ruler.

An investment conference seen as a platform for the crown prince and dubbed the “Davos in the Desert” which was scheduled to take place in Riyadh next week, has been hit by a string of prominent cancellations.

Protestors hold pictures of journalist Jamal Khashoggi during a demonstration in front of the Saudi Arabian consulate in Istanbul on October 5, 2018

Business barons including British billionaire Richard Branson and Uber CEO Dara Khosrowshahi, as well as media powerhouses Bloomberg and CNN, have pulled out of the Future Investment Initiative (FII).

And in a major new blow for the event, JPMorgan Chase CEO Jamie Dimon and Ford chairman Bill Ford also cancelled plans to attend as well as Larry Fink, the head of investment giant BlackRock, and Steve Schwarzman of Blackstone.

A section on the glitzy event website with pictures of the speakers has now been taken down.

US Treasury Secretary Steven Mnuchin said he still plans to attend but would “take (it)… into account” if more information came out next week.

Saudi stocks have also been hit, suffering days of heavy losses, but made a strong comeback on Monday with the Tadawul All-Shares Index (TASI) rising over four percent

Trump has threatened the kingdom with “severe punishment” if it is shown that Khashoggi was killed inside its Istanbul mission.

But Riyadh on Sunday vowed to hit back against any punitive measures while Trump has also made clear he is reluctant to curb all-important arms sales to Saudi Arabia.

Britain, France and Germany also released a rare joint statement saying they were treating Khashoggi’s disappearance “with the utmost seriousness” and calling for a “credible investigation”.