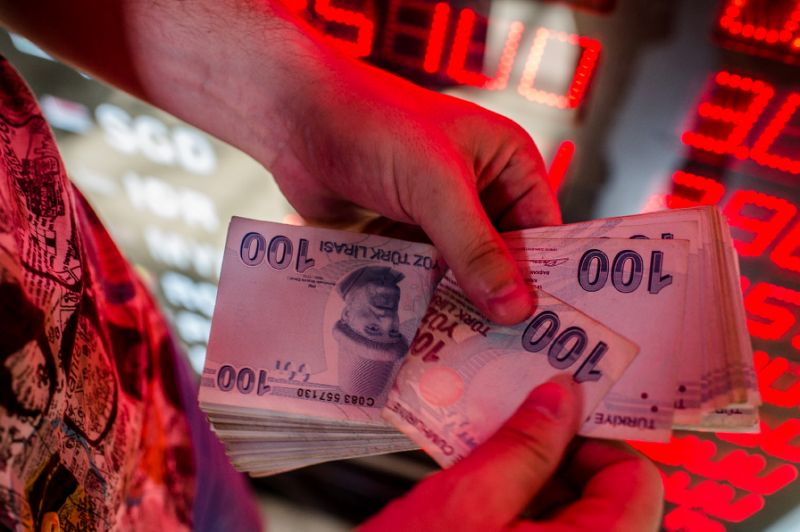 The embattled Turkish lira tumbled over 16 percent to new record lows against the dollar on Friday as strains with the United States intensified, but President Recep Tayyip Erdogan defiantly proclaimed Turkey would emerge victorious in an “economic war”.

Compounding the lira’s agony, President Donald Trump said he had doubled steel and aluminium tariffs on Turkey, noting that relations between the NATO allies were “not very good”.

The lira’s plunge is one of the most serious economic crises that Erdogan has faced since coming to power in 2003 in the wake of a financial crisis in 2001 that brought the economy to near meltdown.

The currency turbulence coincides with the most bitter dispute with the United States since the 1974 Turkish invasion of Cyprus, which so far shows no sign of abating.

Fears over contagion even pushed global equity markets lower, with some European banks coming under heavy selling pressure due to their exposure to Turkey.

“The Turkish Lira is in a state of crisis, as a result of investor confidence in Turkish assets remaining at alarmingly low levels,” said Jameel Ahmad, Global Head of Currency Strategy & Market Research at FXTM.

The tumult also affected Wall Street, which finished the week on a sour note, with the Dow Jones, S&P 500 and Nasdaq all finishing down on Friday.

But Erdogan, who had remained unusually silent until now as the lira crisis mounted, urged Turks to take matters into their own hands.

“If you have dollars, euros or gold under your pillow, go to banks to exchange them for Turkish lira. It is a national fight,” he said.

“This will be the response to those who have declared an economic war,” he said, blaming Turkey’s woes on what he described as an “interest rate lobby” seeking to push the country to higher rates.

Erdogan had raised eyebrows Thursday when he appeared to invoke divine intervention, saying: “If they have dollars, we have our people, we have our right and we have Allah!”

Turkey remains at loggerheads with the United States over the detention for the last two years of American pastor Andrew Brunson and a host of other issues.

Trump intensified the alarm on financial markets with his new tweet doubling the tariffs, noting for good measure the lira was sliding “rapidly downward against our very strong Dollar!.”

“Our relations with Turkey are not good at this time!” he added.

But Erdogan said Turks should not be alarmed by exchange rate movements. “The dollar, the mollar, will not cut our path,” said Erdogan, adding Turkey had alternatives “from Iran, to Russia, to China and some European countries”.

The Turkish foreign ministry hit back at Trump’s comments, saying that the “only result will be harming our relationship” and vowing unspecified retaliation.

It added that Trump’s remarks were “not possible to reconcile with state seriousness”.

Markets are deeply concerned over the direction of domestic economic policy under Erdogan with inflation at nearly 16 percent but the central bank reluctant to raise rates in response.

UBS chief economist for EMEA emerging markets Gyorgy Kovacs said a giant rate hike of 350-400 basis points would be “consistent with real rate levels that in the past helped to stabilise the currency” but warned a deal to normalise ties with the US may also be needed.

And it remains unclear if the bank would be willing to sharply lift rates, with analysts saying the nominally independent institution is under the influence of Erdogan, who wants low rates to keep growth humming.

After winning a June election with revamped powers, Erdogan tightened his control over the central bank and appointed his son-in-law Berat Albayrak to head a newly-empowered finance ministry.

“President Erdogan’s strengthened powers under the new presidential system have made it increasingly uncertain whether policymakers will be able to act to stabilise the economy,” said William Jackson, chief emerging markets economist at Capital Economics in London.

Concerns mounted Friday after a report in the Financial Times that the supervisory wing of the European Central Bank had over the last weeks begun to look more closely at eurozone lenders’ exposure to Turkey.

The report said the situation is not yet seen as “critical” but Spain’s BBVA, Italy’s UniCredit and France’s BNP Paribas are regarded as particularly exposed.

Albayrak, who formerly served as energy minister, on Friday announced what he has described as a “new economic model” for Turkey but he focused on macro-economic issues and steered well clear of tackling the currency crisis.

The lira’s plunge has featured remarkably little on Turkish television channels and newspapers — most of which after recent ownership changes are loyal to the government — with media focusing instead on recent flooding by the Black Sea.