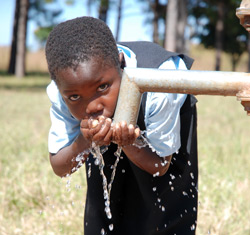 After years of failing to provide portable water for residents, three local authorities have benefitted from the benevolence of a Turkish organization which has supplied electricity powered boreholes that will provide water to more than 50 000 people.
The Turkey Diyanet Foundation, through a local NGO, Islamic Information Bureau Trust, drilled boreholes which were commissioned at the weekend in Marondera, Mazowe and Chinhoyi, bringing relief to thousands of families who have been struggling to get the precious liquid as their respective councils struggled to meet demand.
Speaking at the commissioning ceremony in Marondera, Cherima Ward 4 Councilor, Tafirenyika revealed that the planter at the city’s water treatment plant was designed to cater for a population of 20 000, but was now overwhelmed as it was now serving 70 000 people, adding council had been struggling to expand it.
“As a result, the city introduced water rationing with water only available for between four and eight hours per day. Some of the areas are not even getting any water; and we speak, there has been no water supply for the past three days,” he said.
He said efforts to expand the water treatment plant were derailed by political bickering, adding that within the coming in of the new administration, the issue would be resolved soon.
“Politics has been delaying the beginning of work on the water project but we are now ready. We have already identified an engineer who is still carrying out a feasibility study and soon work will start,” he said.
Councilor Gina Zvigadza of Hunyani Ward 4 in Chinhoyi also welcomed the gesture by the foundation, revealing his council had been struggling to provide running water to residents in the area.
“This area has been having water challenges for a long time and this gesture comes as a great relief not only to me as the one to who the pleas have been directed, but to the more than 20 000 people in this community who will benefit immensely.
He said the boreholes would also benefit the Chengetanai Old People’s Home nearby, which has been struggling to get clean water for many years.
The TDF Africa Specialist, Segcuk Ozturk, said his organization, which is mostly involved with Moslem communities, would continue to support Zimbabwe with humanitarian programmes, adding that they have been working in the country for a long time.Advertisement

The organization also offers scholarships for underprivileged Zimbabwean students to study in Turkey.
Islamic Information Bureau Trust Chief Executive Officer, Adam Yidi Wadi, said his organization would continue to identify areas of need and assist through their partners in Turkey.
He said they were planning to drill sixteen boreholes at Hopley, a densely populated residential area which posed a serious threat of disease outbreaks if it did not get enough water.