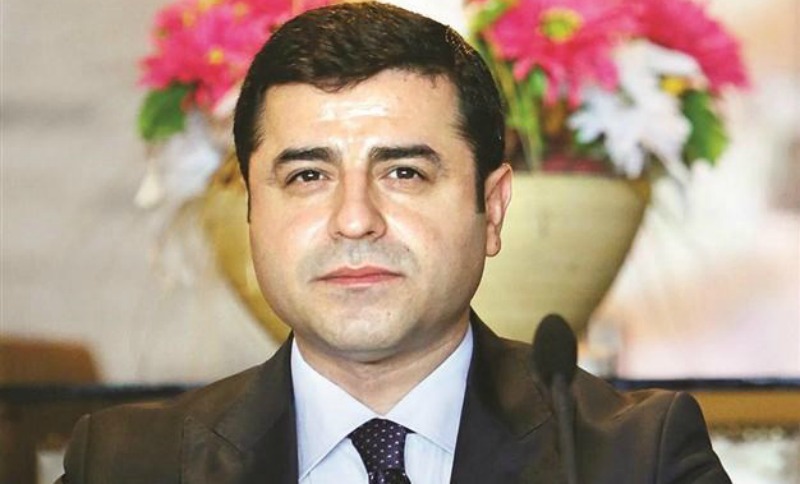 Turkey’s state broadcaster aired a campaign speech by a jailed presidential candidate on Sunday, a week before snap parliamentary and presidential elections.

Selahattin Demirtas asked voters in the June 24 elections to prevent the “one-man regime” of Turkish President Recep Tayyip Erdogan. He called Turkey’s current climate a “teaser” and warned that “the actual scary part of the movie has not yet begun”.

Broadcaster TRT recorded the 10-minute speech at a prison in western Turkey where Demirtas is being held on charges of alleged terrorism. He can run for office because he hasn’t been convicted of any crime.

The 45-year-old candidate for the pro-Kurdish Peoples’ Democratic Party, or HDP, says he was detained “illegally” 20 months ago because the government fears him.

The government has clamped down on the HDP, alleging it has links to outlawed Kurdish rebels, which Turkey deems terrorists. The HDP denies involvement in any illegal activists and says the crackdown is really meant to suppress opposition. Nine lawmakers and nearly 4 700 party administrators and activists have been jailed.

The crackdown followed the collapse of a peace process with Kurdish insurgents in the summer of 2015, leading to the resumption of a three-decade-long conflict that has claimed tens of thousands of lives.

Demirtas said a vote for Erdogan and the ruling party would leave “the fate of 81 million to one person’s mercy”. He warned that no institution would be able to oversee or limit Erdogan if the president wins the election.

By law, each presidential candidate is entitled to 20 minutes of free airtime on public TV. The next round of speeches will take place a day before the elections.

The elections, moved up by more than a year, will usher in an executive presidency for Turkey. Under the new system of governance abolishing the prime minister’s post, the president will be able to appoint ministers, issue decrees, prepare the budget and decide on security policies.

News coverage of the election campaigns has been lopsided in favour of Erdogan, with mainstream television channels broadcasting his daily speeches live. His opponents, especially Demirtas in prison, have been struggling to have their voices heard.

Demirtas said a vote for him as president and the HDP for parliament would be a chance for peace.

“Don’t forget, everything changes with you,” he said. He urged people to vote and protect the ballot boxes.

Demirtas, a human rights lawyer, ran against Erdogan in Turkey’s first direct presidential election in 2014, getting just under 10% of the votes. He and HDP co-leader Figen Yuksekdag, who is jailed, led their left-leaning party to parliament in two general elections during 2015.

Demirtas told supporters: “As long as you are free, I will be free.”