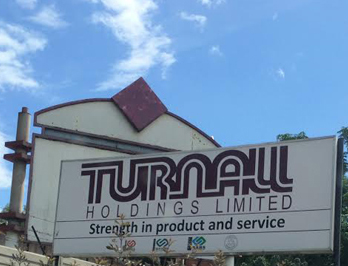 HARARE: Building materials manufacturer Turnall Holdings says it has returned to profitability after years of struggle and culled its board of directors by a third as part of a cost reduction exercise to maintain viability.
“Following significant turnaround work that commenced in September 2014, the company returned to profitability and recorded a profit before tax of US$ 489,738 for the first half of 2015,” said Turnall.
Its net profit for the six months stood at $400,000 from a loss position of $2,6 million over the same period last year aided by tighter cost controls and higher sales.
The company announced that eight non executive directors had left its board, replaced by four appointees.
“A continued cost reduction programme is essential to ensure competitiveness and prosperity of the business in the current depressed marketplace particularly while export markets have become a challenge as a result of weaker regional currencies,” said Turnall company secretary Kenias Horonga in a trading update.
“With effect from 8 January 2016, Messrs P Chingoka, C Dhlembu, C Gadzikwa, P Moyo, J Mushayavanu, J Mutizwa, K Naik and L Sasikwa resigned from the board.”
New appointments to the board are Munyaradzi Gwanzura an attorney; chief executive of property group Mashonaland Holdings, Manfred Mahari; Innocent Chinyama and Noel Hayas, a British national based in Madeira, Portugal.
“The result of these and other changes will be a further significant reduction in the fixed overhead costs of the business. This will enhance profitability and release cash to repay borrowings and invest in the business,” said Horonga.Advertisement