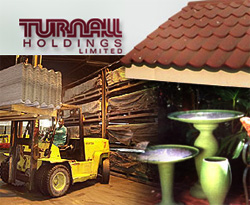 LISTED building material manufacturer Turnall Holdings says volumes for the first quarter to March are 29 percent higher while exports are also on the rise, putting the company on a recovery path, an official has said.
Managing director Caleb Musodza told the company’s annual general meeting on Thursday that the company was now importing cheaper fibre from Russia, realising 20 percent savings on previous imports and lowering expenses lowered by 23 percent.
“We are getting fibre from Russia and it’s 20 percent cheaper than the fibre we were getting,” said Musodza in a trading update.
“In terms of outlook for the year, that is the key development we have had on procurement system and it has a major impact on our balance sheet for the year.”
The company is also expecting an improved financial position for the full year after exports picked up.
“We are scaling up our exports. We understand (the poor performance of) our economy and our view is that we are going to use export markets to try and mitigate against that,” said Musodza.
Turnall’s loss widened to $11,9 million in the full year to December from $4,3 million previously on weakening sales and poor export performance.
Revenue fell by 20 percent to $32 million while export sales contribution fell to 2,7 percent compared to four percent in the prior year.
Musonza told The Source on April 10 this year that the company required an injection of $5 million in working capital, which would greatly improve and quicken the pace of recovery.
“Besides our limited working capital, our relationships with our key creditors is under control and this has allowed our operations to improve,” he said.Advertisement