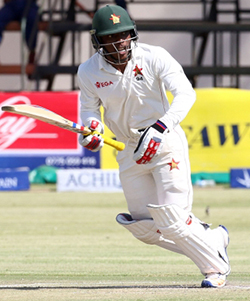 BULAWAYO Metropolitan Tuskers batsman Brian Chari, on Tuesday, shone with the bat as he led his team to a nine-wicket victory over Harare Metropolitan Eagles who were confirmed as the new Pro50 champions.
Chari racked in 105 runs and telling contributions from Craig Ervine (57 not out) and Nkosana Mpofu (28) ensured that the Tuskers left Harare Sports Club as deserving champions.
The Eagles, who have been poor throughout the tournament, easily surrendered the trophy they won last year, posting 208 runs on the board, a target, Tuskers easily achieved with the loss of only one wicket, in 38.5 overs.
The Tuskers picked up form at the right – having finished the Logan Cup at the bottom of the pile – to win five of their six Pro50 matches.
The Eagles won the toss and elected to bat first. Regis Chakabva and Chamu Chibhabha took to the crease to engineer an improbable win for the Eagles.
With six runs on the board, Brian Vitori struck, claiming Chibhabha wicket and rattling the opponents.
The second wicket partnership of Chibhabha and Tino Mutombodzi, added 38 runs to the tally before the latter was caught on the off-side from a Chris Mpofu delivery in the 11th over.
There was a scare for Chibhabha who tried an audacious pull drive only for the ball to drop shot for the fielder at deep midwicket.
Chibhabha, who topped scored with 65 runs, and Nathan Waller`s 48 were the only notable scores for the Eagles who were bowled out for 208 after 44.2 overs.
The erratic Vitori took three wickets for 30, and Nyumbu three for 17, while Williams also took two expensive wickets.
After lunch, Nkosana Mpofu and Chari opened the batting for Tuskers. They put on 81 in 16 overs before the new Eagles man, Talent Munyoro, broke through, bowling Mpofu leg stump for 28.
Ervine replaced him and looked at ease from the start. A lofted straight drive for four by Ervine brought up the hundred in the 19th over, and in the following over Chari reached his fifty off 57 balls.Advertisement

It took Ervine only 42 balls to reach his fifty, and on the other end Chari was eying his century, hitting Musoko for four and six to reach 90.
A cross-batted swat for four past mid-on brought up his hundred, which at first went unrecognized as the scoreboard was behind.
It took another boundary, a lofted straight drive off Mutombodzi, to bring a deserved recognition for the landmark.
One run later, Tuskers wrapped up the match and the one day tournament. to a fine victory to crown a triumphant one-day tournament.