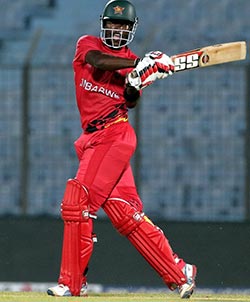 SMARTING from the loss to Hong Kong in the first ICC World Twenty20 2014 warm-up game, Zimbabwe gave themselves a boost with a seven-wicket win over Afghanistan in the second and final practice match at the MA Aziz Stadium in Chittagong on Friday.
After Zimbabwe restricted Afghanistan to 168 for 6, Hamilton Masakadza made 93, helping it reach the target in 19.3 overs.
Zimbabwe’s chase got off to a solid start as Masakadza and Sikandar Raza put on 102 runs for the opening wicket in 10.3 overs before Mohammad Nabi had Raza stumped for 27.
With Masakadza and Brendan Taylor caught not long after, Zimbabwe found itself at 143 for 3. But, Sean Williams and Elton Chigumbura ensured there was no further damage.
With two runs required off four balls, Williams hit a six off Aftab Alam to take the team home.
Earlier, Afghanistan, who had won its first match, started the innings in a steady manner.
Najeeb Tarakai had partnerships of 34 and 37 with Mohammad Shahzad and Karim Sadiq for the first and second wicket respectively.
But two wickets in two deliveries when the score was 71 gave Zimbabwe a foot in the door.
Sadiq fell to Natsai Mushangwe for 16 and Williams sent Tarakai back for 29.
Afghanistan was soon reduced to 104 for 5 before Shafiqullah’s 31 and Samiullah Shenwari’s unbeaten 28 took it to a competitive total.Advertisement