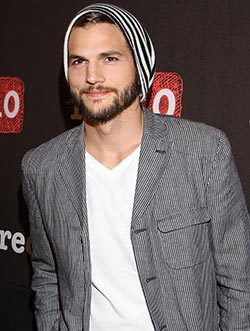 Two and a Half Men is to end after its 12th season.
The hit sitcom starring Ashton Kutcher and Jon Cryer – which also starred Charlie Sheen until he was infamously fired from the show in 2011 – will conclude in 2015, US TV network CBS has confirmed.
CBS boss Nina Tassler has promised the final season, which will begin broadcasting in the US in September, will be a “season-long event” much like the last season of How I Met Your Mother, which focused on the events of one weekend in its final episodes.
Speaking at the network’s upfront presentation Wednesday, Nina said: “[Show creator] Chuck Lorre is creating a season-long event. Chuck is very psyched about this, he’s got some great ideas and very big surprises.
“We know fans and audiences respond to that and that should really give us a nice boost when we launch our new comedy.”
Leading man Charlie was axed from Two and a Half Men in 2011 following his erratic behaviour, such as slamming the show’s creator in various interviews.
The actor reported to a rehabilitation facility for alleged drug and alcohol abuse, but his controversial private life soon eclipsed the show.
He entered rehab in January 2011, putting filming on hiatus, but then proceeded to slam Chuck in interviews.

CBS then decided to cease production on the rest of the eighth season, which is said to have affected around 200 employees and caused an estimated loss of $10million, and terminated Charlie’s contract the following month.
But Charlie’s behaviour has not been the only drama to hit the show, which has for the most part maintained high ratings, in recent years.
In 2012 Angus T. Jones, who played Jake Harper, the nephew of Charlie Sheen’s character, described the show as ‘filth’ because it conflicted with his religious views.
The now-20-year-old left the show last year and said he was “a paid hypocrite”, and these days speaks about God and religion at churches.
While appearing on the show, 48-year-old Charlie was the highest paid actor on television, earning $1.8million an episode.
Ashton, 36, replaced Charlie going into the show’s ninth season and commands $700,000 per episode, while Jon, 49, earns $620,000.Advertisement

In October Ashton topped Forbes’ list of TV’s highest paid actors, while Jon came in second place and Angus, whose net worth is estimated at $15million, ranked 11th on the list.