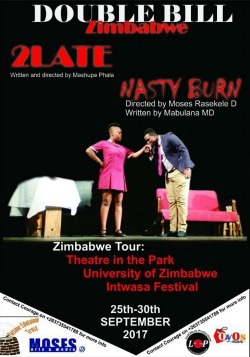 LIMPOPO’s Theatre Makers will, from next week, present two hilarious plays, 2Late written and directed by Mashupe Phala and Nasty Burn directed by Moses Rasekele D, written by Mabulana MD.
The two plays will run from the 25th to the 30th of September and will be staged at Theatre in The Park, University of Zimbabwe at Intwasa Festival.
2late addresses the sugar daddy phenomenon in a realistic manner that facilitates dialogue among families while Nasty Burn is about women abuse at work places looking at how senior managers manipulate their female colleagues through power and status.
2Latehas been performed at Drama for Life Moutse East Festival, Olive Tree Theatre, National Arts Festival, Ishashalaza Festival and has had a tour in Limpopo.
The cast for the play is led by Andisiwe Mkuyana an actor, applied theatre practitioner, make-up artist and film maker. It also features Lebogang Rahube and Motlalepule Tloome an actress, film director and producer.
2Late is a hard hitting story about teenage pregnancy and parental challenges. It looks at the difficulty of raising teenagers and the generational mistakes that silently haunt families. It takes the audience through the journey of Beauty Shabangu’s life, a character representing a modern day teenager.
Beauty falls in love with Thabo who is a fake millionaire who impresses her with money and borrowed wealth. This happens to a level where her studies suffer and she refuses to listen to voices of reason around her.
Regret haunts her when the truth is finally revealed about Thabo.
Nasty Burn explores power relations between men and women at the work place and how the hierarchy system adds to this power relationship.
It traces the story of Kgabo Moleketla who was abused by her father when she was young and also saw her father killing her mother before killing himself.
As she is from a background of abusive men and goes on to experience the same problem at her workplace, she ends up hating men.
The play shows what women abuse at the workplace does impact on the community at large and encourages people to speak out and up against it.