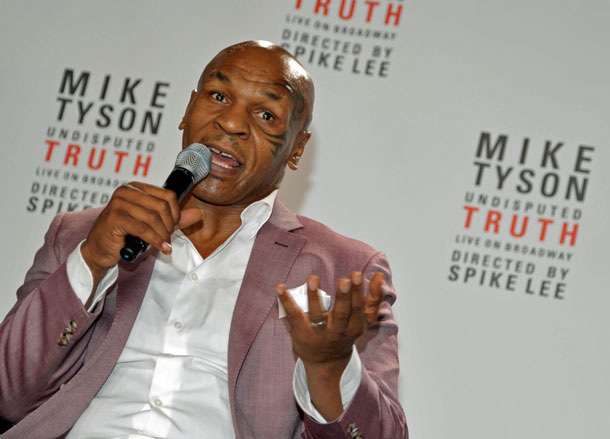 MIKE Tyson says he’s met with Oscar-winning actor Jamie Foxx about collaborating on a possible biopic on his life.
“Me and Jamie Foxx have been talking and he’s willing to take that role and portray me as Mike Tyson, doing my life story,” the former heavyweight boxing champion said Friday during a conference call to promote an upcoming Toronto date for his one-man show, “Mike Tyson: Undisputed Truth.”
”I think he’s splendid because he’s really up to par. I think he would do a magnificent job.”
Further brainstorming of the project will “happen very shortly,” he added.
“I saw him the other night and we discussed it,” Tyson said. “He doesn’t have the physicality but he will. He’s able to … get bulky, so he’s capable of doing it in the future.”
Tyson will bring his solo production to Toronto’s Air Canada Centre on Sept. 10.
In the 90-minute show, he gives an unvarnished account of the highs and lows of his life — from his troubled upbringing in Brooklyn and famed boxing career, to his time in prison and addiction issues.
Oscar-nominated filmmaker Spike Lee directed the stage show, which has already run on Broadway and across the United States. He also turned it into an HBO special that aired last November.

Tyson’s wife, Kiki, wrote the script that includes room for ad-libbing.
“I don’t do shows for any kind of therapy,” said Tyson
“I do it because I enjoy doing it, and I do it because it’s art. It’s changed me a great deal because I can’t walk 10 minutes without anybody asking me when the next show is going to appear.”
Now 48 and retired from the ring, Tyson insisted he’s not the same intimidating guy he was when he was the youngest heavyweight boxing champion of the world: “Not even a little bit. That guy doesn’t even exist no more.”
Indeed, the Tyson of today is sober and seemingly mellow, with self-deprecating bits in the “Hangover” movies and a new role as boxing promoter with Iron Mike Productions.
Besides his stage show, he’s also opened up about his life in the 2008 documentary “Tyson” and in an autobiography published last November.
“Right now, I’m just living life day by day — black, broke and ugly,” laughed Tyson, who declared bankruptcy in 2003 and has a tattoo on his face. “I’m just trying to survive, you know?”Advertisement