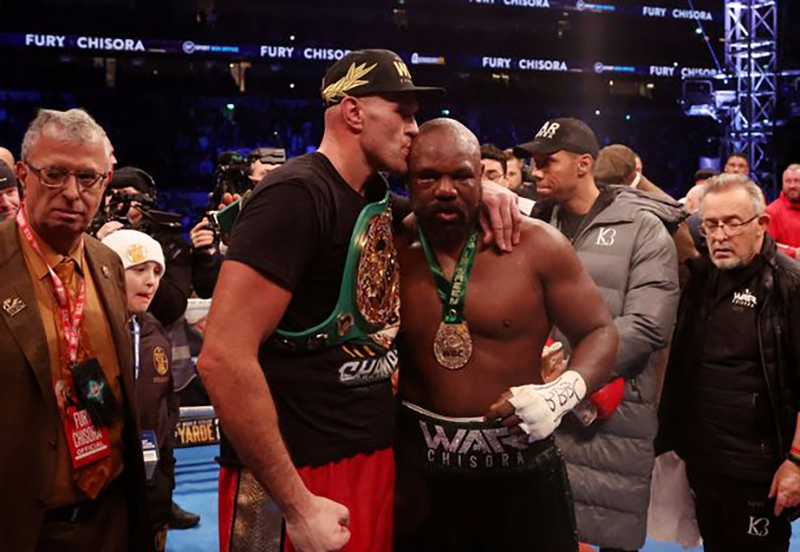 It was a dominant performance from Fury. He subjected Chisora to sustained punishment until finally, with nine seconds left in the 10th round, referee Victor Loughlin stepped in to wave it off.

It was not a final punch that finished it, but Chisora was rightfully spared from his own bravery.

Although Chisora had advanced on Fury, trying to close him down, the WBC champion soon took control of their contest. He began to pummel him, landing almost at will as the bout progressed into its second half.

He kept up that vicious work, grinding down his opponent until the referee had to make his intervention.

Chisora started off jabbing to the body and chest, bulling Fury into a corner. His bright start was only momentary, however. Fury shot a right quickly down to connect and then tipped Chisora back with a sharp left. He showed then that he could open up suddenly with a hurtful combination punches.

Chisora clubbed a right over the top. The WBC champion must have felt that. He swayed back sharply from another Chisora right hand bowled over the top and countered with a spiteful backhand of his own.

Fury hit his right to the body and then to the head. A huge uppercut hurt Chisora in the second round.

From that point onwards, Fury would strike savagely but Chisora was too determined to back down or unravel. Instead, he just endured the blows that Fury dealt.

By the third round, Fury was in such command that he could showboat, winding up his backhand before striking Chisora.

Even when he switched southpaw, Chisora could not stem the assault coming his way.

As the challenger advanced, Fury angled in his left, catching the head or the body, finding too many holes in Chisora’s guard.

Fury continued to grind him down. Manoeuvring his opponent into a corner in the ninth round, Fury teed off with heavy punches.

He was more dangerous still when he found space, drilling the challenger with a quick one-two.

A lump had swollen up beneath Chisora’s right eye and he trudged forward still. He swung a forlorn hook at his tormentor and it struck only the top rope.

To turn things around in the 10th round, Chisora needed a punch that he was never going to find. Instead, he was taking too many hard shots from the champion and the referee brought the fight to an end at 2.51 of the 10th round.

The Ukrainian was ringside and he stepped into the ring to face Fury at the conclusion of the bout.

“Where’s Oleksandr Usyk, the rabbit, Usyk you’re next,” Fury bellowed at him. “You are next!”

Fury hurled expletives at him and Usyk, unblinking, stared back levelly.

Not to be outdone, Joe Joyce, the WBO’s ‘Interim’ titlist after beating Joseph Parker, joined them in the ring. He wants a big fight himself, with either Fury or Usyk.

“I’ll tell you what Joe, I’m the only who calls your name out,” Fury cried. “If this little rabbit doesn’t want it, let’s me and you do Wembley.”

With the delirious cheers from the crowd growing ever louder, Fury sounded determined to take on all comers.