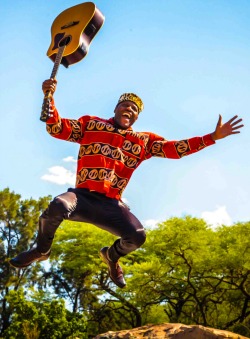 VILLAGERS in Filabusi and surrounding areas are in for an early Christmas treat as renowned musician Majahawodwa Ndlovu popularly known as Jeys Marabini and a host of other musicians are set to perform the Filabusi Hall next month during a musical festival dumbed “U Godlwayo yithi”.
The musical fiesta, which is Marabini’s brain child, is meant to give families an opportunity to see live performance by their favourite musicians far away from beer halls and nightclubs where most musicians normally perform.
“I decided to come up with Ugodlwayo musical festival after realising that most of the venues where musicians perform are not conducive for family attendance. We have conveniently chosen a community hall so that the whole community of Filabusi including children can attend the show,” said Marabini in an interview with New Zimbabwe.
Marabini said the festival is part of his social responsibility for thanking the community for supporting him.
“I was born and bred in Filabusi. I started my musical career in the area and I feel I should plough back to the community for supporting me. The people in the area are starved of entertainment because local musicians shun them,” he said.
Some of the musicians expected to perform at the festival include Sandra Ndebele, Black Umfolosi and Progress Chipfumo.
Marabini said during the festival he will perform some songs from his forthcoming album.
“I am promising my fans a good show. I want my community to have a memorable show. Tickets will cost $3 before 10 pm. After 10pm the show will cost $4.We have lowered the admission fees so that everybody can afford this lifetime opportunity,” said the self -styled king of Filabusi
Marabini said he intends to make the festival an annual event.Advertisement