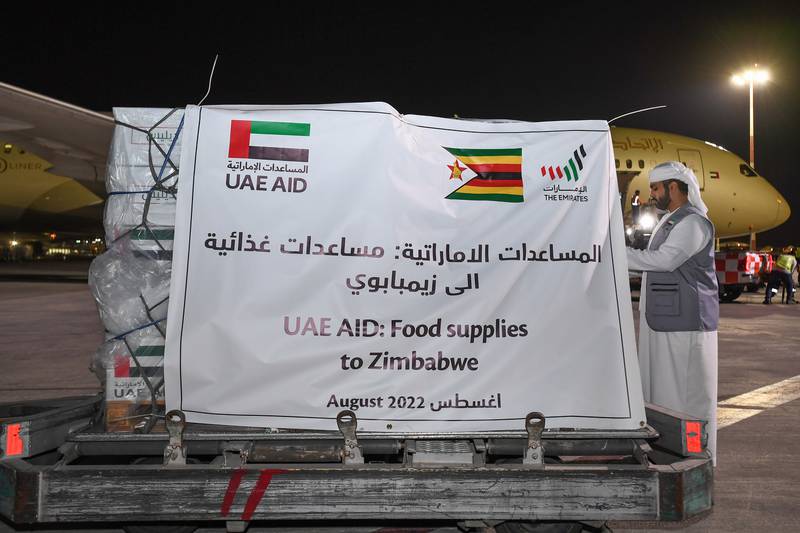 The UAE on Tuesday sent a plane carrying 50 tonnes of essential food items to Zimbabwe.

The food will be distributed to thousands of families and vulnerable groups such as women, children and the elderly, news agency Wam said.

“Sending food items to the Republic of Zimbabwe reflects the strong relations between our two nations and demonstrates the humanitarian role played by the UAE to support African countries and alleviate the humanitarian crises they face,” said Dr Jassim Al Qasimi, UAE ambassador to Zimbabwe.

Al Qasimi said Zimbabwe was one of the first countries to benefit from medical aid sent by the UAE during the early stages of the Covid-19 pandemic. More than 8,000 healthcare workers benefited from the assistance, which helped their efforts to contain the spread of the virus.

Rising prices and a fast depreciating currency have pushed many Zimbabweans to the brink, reminding people of when the southern African country faced world-record inflation of 5 billion per cent in 2008.

After being scrapped in 2009 to put an end to hyperinflation, the Zimbabwean dollar was reintroduced in February 2019. However, the currency has lost more than three quarters of its value this year, as busin

With inflation jumping from 191 per cent in June to 257 per cent in July, among the highest in the world, many Zimbabweans fear the country is heading back to such hyperinflation.

The World Bank this month said in its latest report on global food insecurity that Zimbabwe was among the countries worst affected by the global food inflation crisis.

In his first address to the nation after becoming President, Sheikh Mohamed said the UAE would be a friend to those in need, delivering support and humanitarian aid “regardless of race or religion”.

He said in his speech last month: “Continuing Sheikh Zayed’s approach, we will work to strengthen our role among the world’s leading countries by providing humanitarian aid and by continuing to extend a helping hand to communities in need around the world, irrespective of religion or race.”