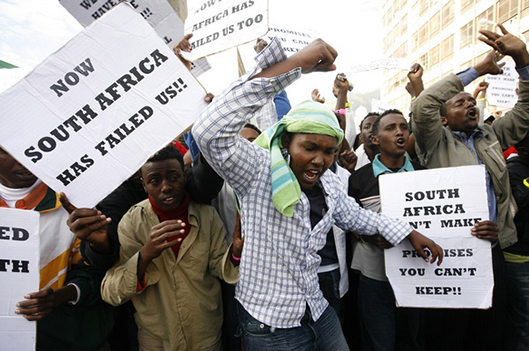 “South Africans will kick down the statue of a dead white man but won’t even attempt to slap a live one. Yet they can stone to death a black man simply because he is a foreigner.”
UBUNTU is clearly foreign and totally alien to South Africa. I write this article to release some of my pent up anger and anguish, caused by what Zimbabweans and other Africans have been subjected to over the past few weeks in that land just south of the Limpopo called South Africa. To those who know their history, the irony is not lost in that the Great Zimbabwe Empire, and hence modern day Zimbabwe, actually had its roots in Mapungubwe, South Africa, just south of the Limpopo. But today black South Africans now use colonial boundaries to determine who is welcome and who should be killed for being a “foreigner” in South Africa.
How can Africans be foreigners in any part of Africa? Have black South Africans ever heard of Pan-Africanism or Kwame Nkrumah? Have black South Africans ever heard of the Front Line States that bore the brunt of the racist Apartheid regime? Do black South Africans know that Zimbabwe and other African states housed their ANC leaders during their Apartheid struggle? Do they know that Zimbabwe and other African countries also provided them with economic and military support and asked for nothing in return?
Zimbabwe’s land reform, which had been planned to commence in 1990, had to put on hold so as not to jeopardize the talks which eventually led to South Africa’s transition to majority rule in 1994. Did we ask for anything in return for our sacrifices? So what have black South African’s sacrificed in return? Not even a thank you. In helping South Africa topple the Apartheid regime, Africa had a unity of purpose, we knew that Africa could not be truly free until South Africa was free, but these black South Africans either have selective amnesia or have clearly not been emancipated from their mental slavery.
Illiteracy, ignorance, limited intellectual capacity and poverty are a dangerous combination, as we’ve seen with the xenophobic attacks in South Africa. For all his shortcomings and critics, Julius Malema correctly identified the root of South Africa’s socio-economic problems as being “White Capital”. Yet the majority of black South Africans mistakenly believe that their continued poverty is a result of the influx of foreigners, and has nothing to do with the Apartheid economy which is still very much intact. The black South African can vote, but thanks to their constitution, they cannot do anything to redistribute wealth or correct the imbalances of the skewed Apartheid economic system which continues to concentrate wealth in the hands of the white minority and marginalizes the black majority.Advertisement