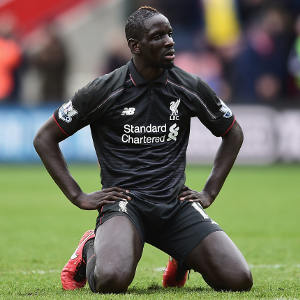 UEFA on Friday dropped a doping case against Liverpool and France international defender Mamadou Sakho, leaving him free to resume his career just two days before the Euro 2016 final.
The defender, who moved to Anfield for £18 million in 2013, has 28 caps for France and had been earmarked for a starting place at the championships before the case threw his career into jeopardy.
“Following a hearing with the lawyers of the player and experts of the Wada-accredited laboratories on this case, the CEDB has decided to dismiss the case,” Uefa said in a statement, referring to its independent Control, Ethics and Disciplinary Body.
Sakho, 26, who was left out of the French squad for the ongoing European Championships on home soil, tested positive after a Europa League tie against Manchester United in March after taking a product to reduce body fat.
The centre-back is said not to have known the composition of the weight-loss supplement and informed Uefa that he had acted in good faith.
He served an initial 30-day suspension that was not extended as Uefa launched an investigation into whether the substance Sakho took should be on the banned list.
“I am happy that this is finally over. It’s been a difficult time for me but I knew I had done nothing wrong,” Sakho told the Liverpool website.
“I am looking forward to getting back in the team and playing again.”
The player was technically available for international duty at Euro 2016, but despite playing a key role for France these last two seasons, Didier Deschamps left him out of the finals squad. He also missed the Europa League final.
Normally a starter for France, in his absence they have powered through to the Euro 2016 final on Sunday, where they play Portugal.
“We are pleased for Mamadou that he can now resume his playing career,” Liverpool said in a statement.
Gary Lineker, the former England international forward and now respected television presenter, tweeted in reaction: “Sakho cleared of doping. Tough to think he missed a Europa League final and Euros.”
“The independent Uefa Control, Ethics and Disciplinary Body (CEDB) met in Paris and has reached a decision relating to the proceedings instigated against Liverpool FC player Mamadou Sakho, following the UefaEuropa League round of 16 second-leg match between Manchester United FC and Liverpool FC (1-1), played on 17 March 2016,” said Uefa.Advertisement

“The proceedings against Mr. Sakho related to a violation of the Uefa Anti-Doping Regulations after the player failed a doping test at the above-mentioned match.”