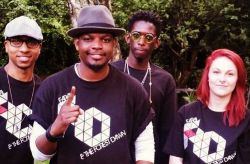 AFTER a year off the radar the London Zimfest makes a return with a strong line-up and renewed energy.
Organisers said this year’s event will be held at Studio Spaces number 110 Pennington St, London, a purpose built venue in the heart of London.
Tickets are going for £10.
There will be live stage performance featuring bands and solo artists, DJ’s and an open mic session in the afternoon.
There will also be a chill out area to allow for a much needed break and an opportunity to relax in a chilled out atmosphere.
Headlining this year’s event will be London-based Afro Soul band Farai and the Forest Dawn, a band with a growing following on the London stage fronted by charismatic singer Farai Muvuti.
Joining FFD on the main stage will be a host of talented female artists, featuring Chashe, another London-based Zimbabwean and her band, Singer Songwriter Gemma Griffiths.
The main stage will also feature talented Mbira artist John Falsetto, the versatile Kamikaze Test Pilots, Kazz from the popular duo Bkay and Kazz and special guest Thabani.