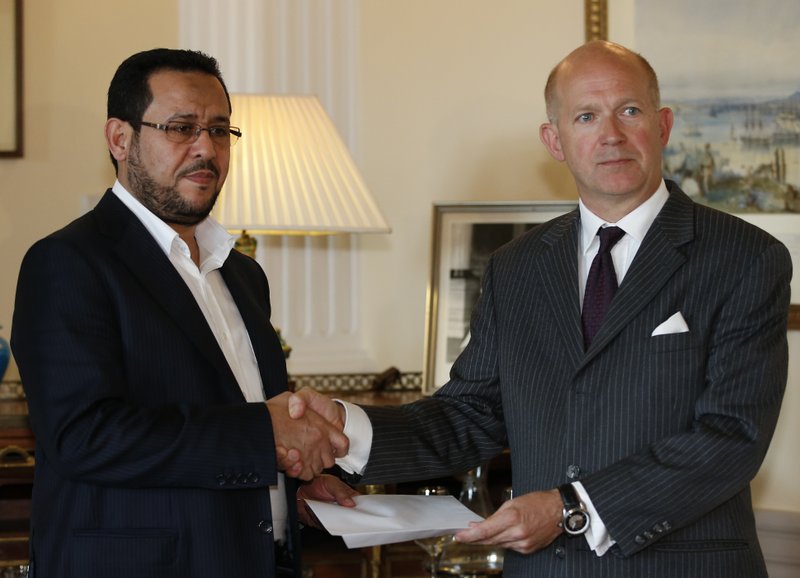 The British ambassador in Turkey (right), hands over a letter of apology from the UK government to Libyan dissident Abdel Hakim Belhaj, at the British Consulate in Istanbul.
Spread This News

LONDON: Britain acknowledged Thursday that its intelligence agents played a role in the kidnapping and torture of an opponent of the late Libyan leader Moammar Gadhafi and the man’s wife — a rare admission of wrongdoing by British spies.

Belhaj, a former leader of the Libyan Islamic Fighting Group that had opposed Gadhafi, and Boudchar were kidnapped by the CIA in Thailand in 2004 and sent to Libya. Boudchar, who was pregnant at the time, says she was tortured and released before giving birth to a son. Belhaj spent six years in custody and says he was tortured repeatedly.

Belhaj and Boudchar say a tip-off from British intelligence helped the CIA abduct them. They have spent years pursuing British officials through U.K. courts seeking compensation and an apology.

Wright told lawmakers that the pair had now withdrawn their claims against the British government, former Foreign Secretary Jack Straw and Mark Allen, a former senior officer in the MI6 intelligence agency.

He said as part of an out-of-court settlement, Boudchar would receive 500,000 pounds ($677,000). Belhaj did not seek financial compensation, saying he only wanted an apology.

Wright said the settlement contained no admission of liability. But he read from May’s letter to the couple, which said Britain was “profoundly sorry for the ordeal that you both suffered and our role in it.”

“The U.K. government’s actions contributed to your detention, rendition and suffering,” the letter said.

“The U.K. government shared information about you with its international partners. We should have done more to reduce the risk that you would be mistreated. We accept this was a failing on our part.”

Boudchar was in the public gallery of the House of Commons with her son, now 14, to hear the apology. Belhaj was given a copy of May’s letter by Britain’s ambassador to Turkey in Istanbul, where the family now lives.

In a statement issued by his lawyers, Belhaj said: “I welcome and accept the prime minister’s apology, and I extend to her and the attorney general my thanks and sincere goodwill.”

Boudchar said the case “has forced me to relive the lowest moments in my life for many years, and at times it has been a real struggle to keep going. But by today’s settlement I look forward to rebuilding my life with dignity and honor.”

In an opinion piece in the New York Times, Boudchar said she was chained to a wall and tortured by the CIA when she was pregnant while being detained at a secret site in Thailand. She said she wanted to know what Gina Haspel, President Donald Trump’s nominee to head the CIA, knew about her mistreatment.

Haspel, a 33-year CIA veteran, is believed to have run a CIA “black site” in Thailand in the early 2000s.

The renditions happened at the height of the U.S.-led “war on terror,” and at a time when Britain was trying to improve relations with Gadhafi, a former international pariah who had recently renounced weapons of mass destruction.

In 2004, then-British Prime Minister Tony Blair met Gadhafi in Libya, beginning a thaw in relations dubbed the “deal in the desert.”

After Gadhafi was overthrown and killed in 2011, documents were discovered that disclosed the cozy working ties between Gadhafi’s spies and Western intelligence officials.

They included a faxed letter from MI6 congratulating Gadhafi’s intelligence chief Moussa Koussa on the “safe arrival” of Belhaj, saying that it was “the least we could do for you and for Libya to demonstrate the remarkable relationship we have built over recent years.”

Wright told lawmakers that in the wake of the Sept. 11, 2001 attacks, Britain and its international partners “were suddenly adapting to a completely new type and scale of threat.”

He said British agencies “were in some respects not prepared for the extreme demands suddenly placed on them” and were too slow to understand “the unacceptable practices of some of our international partners.”

“The government has enacted reforms to ensure that the problems of the past will not be repeated,” Wright said.