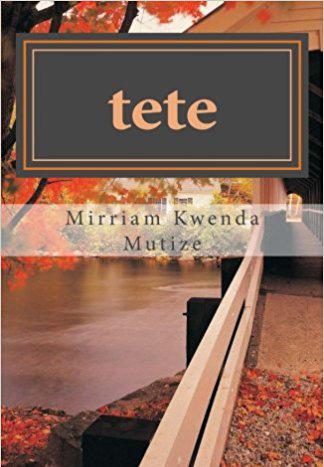 UNITED Kingdom based author, Miriam Kwenda Mutize has published a Shona novel titled Tete, which she said was meant to promote her mother language and encourage Africans to value and be proud of their indigenous languages.
“My first challenge was the need to embrace and be proud of our first languages as African communities,” Mutize told NewZimbabwe.com.
“I have visited Russia, Portugal, Spain and France and they are proud of their languages. I feel people some bilingual people who have an African language as a first language, think their mother tongue is inferior to that of a European language.”
She said she was working hard to teach her children Shona but said it was difficult when the community did not value the language.
Mutize said the book was inspired by the life she lived as a young woman and the experiences of having to watch young girls, ladies and mature women make choices that sometimes worked against them.
“I have been privy to choices made by young girls, ladies and mature women and have asked them the same questions over and over again, How can you? How could you?
“The answers always seem to be the same time and time again. It was the process of examining and internalising about human behaviour, societies, and social taboos that I compiled the notes that make up the book Tete.”
She said the book was about a Zimbabwean woman, Violet, a spinster who migrated to the United Kingdom in search of greener pastures and brought along her only brother who left behind a wife and two kids. The brother, however, while in the UK decides to co-habit with Violet’s friend.
Violet, on the other hand, meets a man who promises to marry her but dumps her for a work colleague after making her pregnant.
“Tete is a story of love, betrayal, bitterness, and family squabbles. It is about relationships with in-laws and the intricacies of the dynamics of the vaShona people. It is a tale of evolving cultural practices, morals and identity issues,” she said.
Mutize said she had written the book in first person to enable the reader to walk the journey of the main character, Tete Violet, so that the reader could be less critical of her but get to understand the pressures that society put upon women.
She said the story was about raising awareness and understanding rather than preconceived judgment.Advertisement

“Tete is a paternal female relative who is a respected family advisor, mediator and role model in the vaShona people family structure.
“Much responsibility is placed on her to take a leading role in shaping the moral fabric for her family she is expected to construct, influence and set the tone of her family atmosphere.
“The peace of her family is on her shoulders and so is the breakdown of relationships.”
The Book is now available on Amazon.
https://www.amazon.co.uk/dp/1546892729/ref=cm_sw_r_cp_awdb_nQVkzbBMQ327P