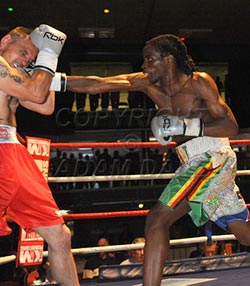 YOU may not have heard much of Tamuka Mucha (full name Tamuka Muchapondwa) but the Zimbabwe-born fighter is highly confident that he will be the welterweight on everyone’s lips come the end of 2014.
The (6-0, 1KO) prospect now based in Reading makes his debut on Sky Sports this Saturday with a four-round contest on Matchroom’s ‘Reloaded’ bill in Cardiff headlined by the European Featherweight title clash between Lee Selby and Rendall Munroe.
Mucha, 20, who made his debut on a show featuring Tyson Fury in 2011 wasn’t exactly short of confidence when he spoke to Livefight recently.
“I definitely think after [Matchroom Boxing Promoter] Eddie Hearn has seen what I bring to the table [this Saturday] he will see me as the type of fighter that he’ll want to have on his shows more often.
“On Feb 1 it will be my opportunity to go out and present myself as a real welterweight prospect and to do it on a big Matchroom show on Sky is the best opportunity for me to show that I stand out from the rest.”
And despite being a relevant novice in the professional ranks and having never been past six rounds, his brashness took him into talking about predictions for 2014.
“I’ve been talking to my manager, Chris Sanigar and I expect by the end of this year to have picked up a significant title like the Southern Area or the British title.
“I’m not going to call anyone out all I’ll say is whoever is put in front of me I’ll be willing to face. There’s good young prospects coming up.
“I’m not sure who’s got all the titles but I do know Frankie Gavin has defended his British title three times already so I know he’ll be looking to make it vacant and whatever person gets that shot is the person I will have my eye on.”
Fighting on Sky Sports and predicting title wins is a far cry from the 11-year-old who left a testing lifestyle behind him in Harare and then moved to the U.K in 2004.
Despite having an interest in business studies