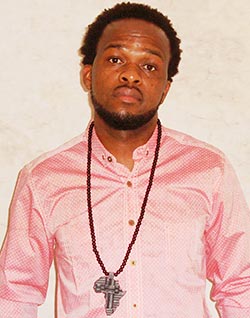 UK-BASED Zimbabwean Belvin Tawuya has launched a website aimed at promoting Africa inspired clothing and accessories.
The idea is to provide a one-stop platform for gifted African designers and crafts people and help expose them to an international market. The range of products on sale includes t-shirts, sweatshirts, tank tops, shirts, bags, jewelry and phone and tablet covers.
Belvin is a graduate in Digital Media and Broadcast technology and said that his long-term goal was to promote undiluted African creativity through all possible channels.
He is the brains behind the clothing brand Afroteez Apparel and also the website, www.afroteez.com, which is an open marketplace for other designers.
“I have always had a curious mind and am always keen to understand how things are made. This saw me customizing my own clothes when I was as young as 12 and coming up with concepts for radio and TV shows in my teenage years at a time when it was uncommon to aspire to make a living through one’s creative gifts,” he said.
“I’ve now had the good fortune to live and work in environments where the creative industry is lucrative and generates hundreds of millions of dollars in revenues.
“This gave me the confidence to pursue a dream I have had since I was in high school. It’s still early days but the feedback so far has been encouraging.
Tawuywa said the company was formed in August 2013 and the website launched in February this year.
There has also been a professional approach to setting up the venture which is evidenced, in part, by a sleek and fully functional website that allows for payment via most methods including PayPal, Western Union and bank transfers enabling those from places without credit and debit card facilities to also make purchases.
“There has been overwhelming support and a lot of interest in response to our Facebook page (Afroteez Apparel),” said Tawuya.
“At the moment, sales are primarily via the website but every now and again we also participate in Afrocentric fashion shows across Europe as well as huge and popular markets such the Old Spitalfileds in London.”
Tawuya said they are were in advanced talks with a respected outlet in London to stock some of their products and was hopeful that people would be able to make in-store purchases as well.Advertisement

“There are also ongoing discussions with potential partners in Ghana, Mozambique, South Africa and of course Zimbabwe so hopefully there’ll also be stores stocking our products there too,” he said.
“There is definitely a gap in the international market for a high quality Africa inspired clothing brand and we are more than confident that Afroteez will satisfy the desire of those who wish to represent the African style, culture and consciousness through cutting edge fashion.”