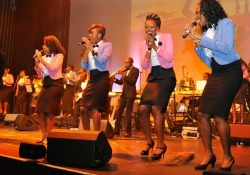 UK-BASED Southern African Gospel group, Free to Worship, will be hosting a concert on the 24th of October 2015 in Bedfordshire to celebrate their five-year milestone.
Organisers said the concert will be held at the Centre for Carnival Arts in Luton.
The group was founded by Forward in Faith Ministries International, an interdenominational group bringing together talented gospel artists from Zimbabwe, South Africa and Zambia.
Members said this will be “a momentous occasion” as they have beat the odds to remain standing as a group, taking cognisance of the lifestyle pressures in the UK and also hurdles that are encountered by many groups.
They have produced and recorded four projects to this date.
The concert will see the return of Aaron Manatsa, the son of legendary Zex Manatsa as the Music Director again.
Aaron is one of the founding members of the group but was absent from project 3 and 4 due to work, academic and family commitments. He is returning as a graduate.
The international Award winning gospel artist Obert Mazivisa will be one of the singers on the night.
Mazivisa is also one of the founding and long standing members of the group. He attributes part of his success to the exposure he gained as a result of the release of ‘Baba we are waiting’ via Free to Worship platform.
The Free to Worship Group concert will be reuniting former group members and the long standing members.
It is expected that the adorable Dumi Ncube will perform the much loved ‘God Nahelele’.
Emily Changa, Liz Adams and Tsungi Tsikirai are also expected to do what they do best, that is to Worship.
The group’s journey began in 2010, the year that Forward in Faith Ministries celebrated their 50th Jubilee Celebrations.
Talented musicians gathered together, lifting their voices and liberated, celebrating their salvation.
“This month’s concert is a celebration of five years of lifting arms and raising voices singing ‘Free free to worship you….free to lift my hands…free to worship you,” said a statement from the group.
“Through the power of music, with one voice, we will be testifying, reminiscing and retracing footsteps. We will be saying Ebenezer thus far the Lord has taken us.
“Although the Concert is about looking back, yet it is an expectation of a promising successful future.”Advertisement