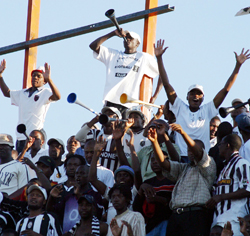 THE UK chapter of Highlanders FC supporters will on Saturday 10th December host celebrations to mark the 90 years of existence of Zimbabwe’s the oldest football club.Dubbed Bosso@90, the event will be held at Lucozade Power League in Aston Birmingham.
“On the 10th of December, we will be celebrating with the hundreds of Bosso supporters and some will be travelling from all over the United Kingdom, we have people coming from all over England, Scotland and Ireland and some coming from Wales,” said Interim Chairman of the UK Chapter,  Qobo Mayisa.
The celebrations will kick-off with a mini football tournament and will culminate in the Bosso@90 party with artists including Sisa Senkosi debuting her new  Highlanders song, Poets Edwin Mathe , African music and dance ensemble Flame Lilly arts, award Winning Gospel singer Nkosi ka Ndlovu and several Djs lining up to entertain the fans.
“This is a family event,” said Mayisa, “food and beverages will be available for sale. This event will celebrate the long and illustrious history of the oldest and one of the greatest football teams in Zimbabwe and is part of the global celebration of Highlanders FC.”
The celebration will provide a platform for Bosso fans based in the UK to discuss the practical ways to support the team in Zimbabwe. It will afford those who have ideas an opportunity to moot ways of enhancing the team brand globally.
“We are inviting all Highlanders supporters and indeed all football lovers to come and celebrate with us on the 10th in Birmingham,” Mayisa added.
Bosso was founded in 1926 as Lions Football Club, composed mainly of boys born in Makokoba (Bulawayo’s oldest township) by two of the last Ndebele King, Lobengula’s grandsons, Albert and Rhodes, who were sons of Prince Njube. In 1936 the players changed the name to Matebeleland Highlanders Football Club.
The UK Chapter of Highlanders FC Supporters Association was formed in 2016 with the blessing of the Highlanders FC executive as the official UK platform to support the activities of the team and grassroots football in general with particular interest in youth development and participation of disadvantaged and marginalized groups.
The event is taking place at Lucozade power League, Salford Stadium, Lichfield Road, Aston Birmingham B67TG.Advertisement