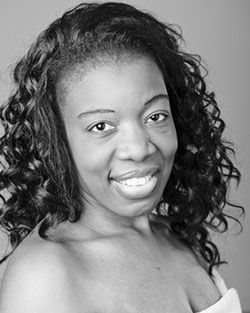 SHE may be rubbing shoulders with the likes of Brad Pitt and Angelina Jolie but flamboyant television personality Caroline Masvongo is keeping her feet firmly on the ground and is determined to stay true to her roots.
But don’t be fooled, she is no shrinking violet, for this Zimbabwe-born performer’s career is going from strength to strength.
As well as starring in her own TV show, The Nyaka Chana Show, the 32-year-old has also been selected to be one of only 16 in the country to travel to LA for the best in the business acting and singing training.
Caroline made her mark on British television after appearing on the likes of Come Dine with Me, Big Brother’s spin off show Bit On The Side and more recently Sky One’s Don’t Sit On The Front Row.
She was ‘spotted’ by producers and offered her own show, named after her stage name Nyaka Chana, where she performs comedy scenes with children, filmed at Pinewood Studios.
“When I see people like Brad Pitt and Angelina Jolie at the studios, I just can’t believe how far I have come,” said Caroline.
“I feel very humbled. Brad and Angelina Jolie are regulars in my studio and always say they are going to bring their kids on my show.
“They are currently filming Cinderella and Star Wars starts filming in May. It feels like I am in a dream all the time.”
Staying true to her roots, Caroline is determined to stay living in Solihull and is even starring in a local theatre production of Give My Regards to Hollywood by renowned director and choreographer Matthew Lambden.
“Maybe one day I will have my very own hall of fame at the back of Solihull Arts Complex,” Caroline said
“I want to prove to people that real talent can come from the Midlands and not just London. I will travel for my work but my heart always belongs to Solihull.”
Caroline plays Shirley Bassey in Give My Regards – an adaptation of Give My Regards to Broadway – at the Old Rep in Birmingham on April 25 and 26.Advertisement