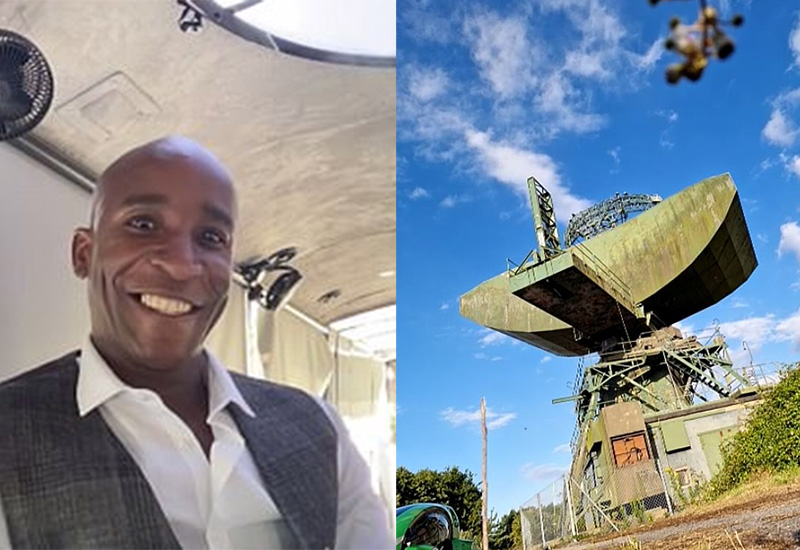 While most millionaires spend their fortune on pricey cars and luxurious boats, William Sachiti used his fortune to purchase a Cold War era radar station in Norwich, England.

Sachiti, who is a British entrepreneur, purchased a network of private roads along a 250,000 square feet to test his ‘spaceship, alien-looking’ autonomous vehicles, but the radar system was an added bonus.

‘UFOs obviously,’ he jokingly told DailyMail.com in response to being asked what he plans on doing with the gigantic 25-foot-tall machine that once alerted the British army to oncoming nuclear missiles.

‘I will find a way to bring this to life and let the people choose the best way to use it,’ he said.

‘If people want to hunt UFOS, I guess it is hunting UFOs.’

The massive system is located on the Royal Air Force Neatishead, an air defense station in England.

During a Zoom interview, Sachiti gave DailyMail.com a close up look at the coveted radar system that is about 65 feet wide and sits on a large pedestal.

‘This thing could do for others what Star Trek did for me as a kid,’ he said, noting that it will take about two years until the radar system is up and running.

He reached out on Reddit for help on bringing it back to life, which he says is part of his belief in the power of crowdsourcing.

Sachiti is a roboticist, artificial intelligence expert and serial entrepreneur who uses his free time to solve the problems of the world, he told DailyMail.com.

His prized possession, however, is his company Kar-go, which uses self-driving cars to deliver packages. 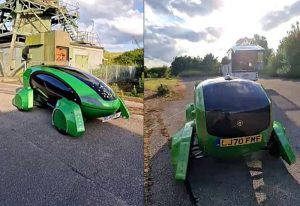 ‘Think of it as a post office sorter on wheels. It drives to an address, opens its trunk and out comes a package,’ Sachiti said, sharing a look at the small, green robotic machine with DailyMail.com.

‘It only delivers small parcels because they make up 80 percent of the parcels shipped.’

The autonomous, four-wheeled vehicle sits low to the ground and features an aerodynamic look that is colored green and black, along with a license plate on the front and back.

Sachiti told DailyMail.com that it is not just the vehicle he is focused on, it is the supercomputer ‘brain’ inside of it.

The system is being used by the Royal Air Force and by a company that monitors 25 percent of UK roads.

‘They are using our car vision to detect potholes and depth,’ he said.

Elon Musk’s Tesla announced on Monday that its vehicles are now scanning for potholes – a feature that came much later than Sachiti’s.

He also gave DailyMail.com a tour of his ‘space bus’ that is a traveling office and auto shop for engineers to work on the autonomous vehicles.

It once ran on diesel, but Sachiti redesigned it to only use the power of the sun.

The highlight of the bus is a chair with a steering wheel at the back, which looks similar to one seen in arcades.

The chair allows engineers to take over control of the autonomous vehicles and drive them into the bus to work on them.

While his team is testing the vehicles along the roads, Sachiti plans on bringing new life to the radar system, which was part of an early warning system meant to alert the British military if nuclear missiles were coming their way.

Known as the AMES Type 84 radar unit, this one was in operation from 1962 through 1994 and released microwaves to detect nukes.

Sachiti does not plan on using it for its original purpose, but instead hopes the public can find a task more suitable for the modern world.

‘My expensive hobby will be finding UFOs,’ said Sachiti. ‘If that is what the world wants, who am I to judge.’