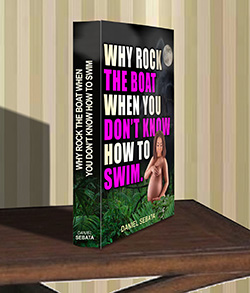 WHEN the economic situation in Zimbabwe deteriorated, citizens just packed their bags and left. But the exodus was neither exactly planned nor the same for everyone. Some families seamlessly separated but others were ruthlessly taken apart by the diasporian attraction. The author of ‘Why Rock The Boat When You Don’t Know How To Swim?’ explores life in the diaspora, through the narrative of Dolly Sibanda, whose voice rings as true as a bell.
This is a remarkable story of a Zimbabwean asylum seeker, Dolly, who finds herself in a psychiatric hospital, in Bournemouth, England, just a few months after returning from visiting her sick mother in Zimbabwe.
On her return journey to the English shores, using an asylum seeker’s British Travel Document, she experiences multiple traumatic near death situations. This leaves her unsure of what is real and what is imagination? Her husband struggles to cope with the plausibility of a stalker from Zimbabwe to the United Kingdom.
Psychiatrists tell her it is Post Traumatic Stress Disorder (PTSD). A witchdoctor in Luton tells her it is witchcraft by entities envious of her. In church they tried to cast out a stubborn demon. Was there anyone who would believe her unconditionally?
The book explores trials of immigrants and the manner they experience and cope with events beyond their control. Daniel Sebata, the author, brings these events to life while maintaining suspense and inflaming the imagination. His description of housing, journeys, poverty, experiences and violence sounds drawn from real life and all adds the impact the story makes on the reader. The storyline is multi-layered with twists and turns throughout the book. The end of the story is shuttering, as Dolly comes face-to-face with the reality.
The novel launches on paperback early September, and the e-book will be available on leading e-book outlets late September.
Below are excerpts of Dolly’s story that touches every fibre of most immigrants abroad.
On immigration rules abroad, Dolly, says to her mother lying on her death bed; “But even those so-called developed countries, are governed by heartless men. Men you would think kabazalwanga babhotshwa, they were not born but poo-ed. I tried to obey those rules mama…”
I am sure some of us have been in her shoes before.Advertisement

On police corruption, she observed; If the police officers on those road blocks did just half of their job properly, Zimbabwean roads would be the safest in the world.
When her husband failed to send her the ticket as agreed before he left she says; ….When I started to hear rumours that he was seen with some white girls having a good time, the bells rang even louder than the Big Ben. Ukubona kanye yikubona kabili, once bitten, twice shy. That was why I took the ‘fly now and pay later’ scheme from a travel company, and flew to the UK, denied the visitors’ visa…..
How did you join your spouse abroad?
We are all subject to death or sickness, whether in the diaspora or in Zimbabwe. When Dolly’s mother had a second heart attack back in Zimbabwe, she visits her on a British blue asylum seeker’s passport, she apologises to her;
….Her hands were cold. “Mama I’m here, can you hear me? Can you see me?” She didn’t respond.” ……I’m sorry for not visiting you as often as I would have wanted mama. I am embarrassed because I have nothing to show for being in the land of plenty.
Does this ring true to you or someone you know?
When she arrived in Bulawayo to see her sick mother she states; I was walking on a ten centimetre stiletto and my nails were painted red, I had to make an impression, after all I had just arrived in Zimbabwe from the United Kingdom. With size 36DD breasts and natural, no boob job, I twisted a few necks that day. My breast and buttocks balanced my body quite nicely. I didn’t look like I would fall on my face because of the size of my breasts overcoming the weight of my buttocks. Nor did I appear like I would fall backwards due to the size of my buttocks, too heavy for my breasts. I didn’t look like those white girls in Bournemouth, whose backs were as flat as planks, who went for a 40F boob jobs, leaving them leaning forward like grannies.
On her return journey to the United Kingdom, Dolly was forced to cross Limpopo River on foot and she was rightly concerned, as she observed;
Their breakfast, lunch and dinner is made up of Zim fresh meat. If a South African and a Zimbabwean crossed the Limpopo River hand in hand, I would bet with my last penny that the crocodiles would pick the Zimbabwean …I took comfort from the fact that as a supposedly new British citizen the crocodiles might spare me, they might show me some respect.
Beans, Dolly’s family friend, on South Africans’ xenophobic;
….Those who escaped white persecution, were given sanctuary by the very people they are killing today. They have very short memories indeed….
Were you in South Africa, when Zimbabweans and other Africans were burnt alive?
Get the book…