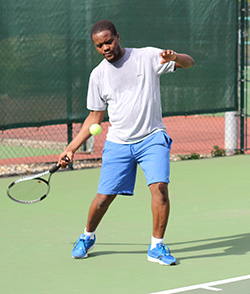 A GROUP of Zimbabweans based in the UK have come together to form a tennis club that organisers hope will unite a large Zimbabwean community spread in many parts of the kingdom.
The Zimbabwe Tennis Club (UK) kicks off its inaugural season with a Hampshire tournament this Saturday which has received generous sponsorship from Airtime Sharing.
The company is a Zimbabwean owned firm that has assisted Diasporans with affordable rates to contact relatives back home as well as pay their bills.
The tennis club itself is the brainchild of international umpire Kossam Mhangami who has officiated in numerous tennis grand-slams.
“Having seen what the British Lawn Tennis Association (LTA) is doing to promote grass roots tennis in the UK,” Mhangami said, “I thought would it not be such a wonderful thing if we could get the Zimbabwean community playing tennis on a wider scale.”
The tennis club initiative was first shared in August last year to a few enthusiasts comprising players, coaches and fans who immediately fell in love with the idea.
Since then, members have been meeting with its player base growing from eight to over 20 players who all registered to play at the last meeting in November.

Just under 30 players have since registered to compete in Saturday’s tournament which will comprise three categories; namely the ladies, gentlemen and mixed doubles.
Saturday’s event will start at 12 mid-day right up to 6PM at Aldershot Tennis Club, Princess Avenue, Aldershot, Hampshire.
During the tournament, fans will be treated to over 20 matches as well as freebies from tournament sponsors Airtime Sharing, among other delights.
The 2016 Winter Championships will give players in the UK an opportunity to showcase their talents in front of their fellow countrymen.
The extravaganza will also help build points in a league where the eventual victors end of the year will get to play at the LTA’s main base the National Tennis Centre in December.
The tournament is free to all with all costs having been met by the ZTC (UK) as well as Airtime Sharing.
Airtime Sharing deliver consumer VoIP and international roaming services and the convenience of paying for electricity, water and cable bills and topping up mobile and internet service for families in your home country.Advertisement

“Our focus this year is to get more Zimbabweans in the UK into sport and with tennis, we can get the whole family involved,” said tournament organiser Raymond Shumba.
“Our meetings will also provide a social element bringing together people who might otherwise never meet were it not for the game.”
The club, Shumba added, was still in the process of recruiting more members.