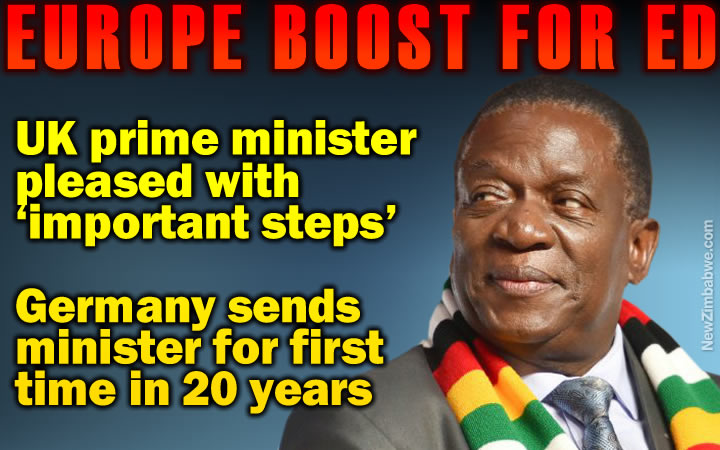 President Emmerson Mnangagwa has effectively received his biggest international endorsement after British Prime Minister Theresa May told a South African television station that she was giving Harare’s new ruler the benefit of doubt.

The development also came a time Germany dispatched a minister to Harare, the first such visit in 20 years according to finance minister Patrick Chinamasa.

May told anchor Jane Datton of eNCA that Mnangagwa’s promise to investigate the violence that exploded in Harare on August 1st in which the military used live ammunition and resulting in the death of six people was an important step going forward.

“I was pleased to hear that President Mnangagwa has set up a commission of inquiry into the violence. I think that is an important step for Zimbabwe,” May said.

Although she seemed to dodge the question on categorical endorsement for Mnangagwa, May said the recent election won by Zanu PF was an opportunity for Zimbabwe to find its way back to the table of nations.

Pressed further on Mnangagwa’s legitimacy given his victory was challenged in the Constitutional Court by opposition MDC Alliance candidate Nelson Chamisa, May retorted: “The President (Mnangagwa) is an elected President.

“He is making an important step in saying he will set up a Commission of Inquiry into the violence.

“I think that is a very important signal from him about the Zimbabwe he wants to see for the future.”

“A Zimbabwe that is taking the opportunities for its people (and) for the future.”

Mnangagwa took over from former President Robert Mugabe in November last year after a military coup and May sent two envoys to meet the new Zanu PF leader.

Britain did not, however, send a delegation to Mnangagwa’s Sunday inauguration but was represented by its envoy in Harare Catriona Liang who has long accused of backing the Zimbabwean leader.