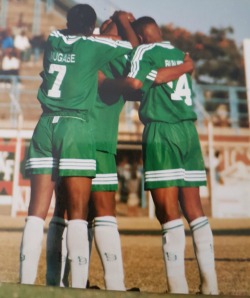 CHAMPIONS Caps United’s UK based Legends will be hosting their first ever Soccer Night Dinner Dance in the UK to celebrate Zimbabwean football and all its achievements.
The event will be held on the 10th of December 2016 at Iqbal Banqueting Suite 136-148 Victoria Road Aston Birmingham, B6 5HH.
According to organisers, proceeds from the event will go towards supporting junior football development while any surplus will go towards supporting the welfare of former players who have fallen on difficult times.
The event could not have come at the better time for many Caps Unite supporters in the UK who are still ecstatic and basking in glory celebrating their 5th title thousands of miles away from home.
Simon Chimanya, the Caps United UK Supporters Association Chairman, said “We thank Mukoma Kode and the legends for organising this event for us. We are still in cloud nine after winning the league. The celebrations will continue all the way to Birmingham. Please Makepula mese muUK come let’s celebrate our historic 5th title Kepekepe-Bhora Dzakachekwa Baba.”
Joe Mugabe, the former Caps United Captain and now chairman of the Caps United UK Legends Association, said, “The event presents an opportunity for the legends to give back to the club whose junior policy contributed effectively to establishing our careers. We want to thank Caps United FC by giving back to the club in kind; we want to revive junior football in Zimbabwe not only at Caps United alone but in the country as a whole.”
He added, “It’s just a soccer night, to eat and drink while reflecting on Zimbabwe Football. We are welcome all football people and fans from Dynamos, Highlanders and all other teams to come and enjoy. We want people on the night to discuss football generating ides and also coming up with tangible solutions on how to improve our football at home. We want the dinner to be interactive and fun on the day.”
The Caps United Legends Association executives also includes the likes of Frank Dealer Nyamukuta, Liberty Masunda, Kelvin Mushabi, Timothy Chirozvani, Brian Badza, Raymond Undi, Ticha Nyenda, Innocent Mugabe, Artwell Mabhiza, Tabani Sibanda and many other former Green Machine players who are now living in the UK.
The legends are working in collaboration with Team Zimbabwe UK-a Football Community Project that is fronting development of Zimbabwean football in the UK using the Diaspora Community.Advertisement

Timothy Chirozvani, who also played with Mugabe and is now the treasure of the Legends Association, appealed for support.
“We are ready to host the dinner. All preparations have gone according to plan. We look forward to see all the soccer loving Zimbabweans,” he said.
Team Zimbabwe UK CEO Marshall Gore said he appreciated the idea of the legends fundraising cause. Gore said his organisation will be supporting the event with mobilisation. He called upon all the soccer loving Zimbabweans in the UK to support the cause by buying tickets.
“I believe we are making progress as a community and we must unit in supporting such good causes,” said Gore who is also the newly appointed Chairman of the Africa Football Association (AFA).
The event will be graced by various speakers and house hold sporting names in the UK and many former players from Zimbabwe. Amongst the special guests will be Ambrose Mendy one of the most successful black British Sports Agents and a representative from the English FA Inclusion Project.
Efforts are also being made by the organisers to get the two Zimbabweans currently playing in the English premiere league Tendayi Darikwa of Burney and Brendan Galloway, who is currently on loan to West Bromwich Albion, to attend.
The Limpopo Groove Live Band will provide entertainment supported by veteran DJ- King Alfred-one of Zimbabwe’s finest DJs in the UK. The event is also being supported by Zimbo Live TV, Diaspora Funeral Cash Plan, Bhora Africa Blog, Newzimbabwe.com and Virtual Media Technologies who designed the Caps United FC website.
The night will also see the crowing of the Zimbabwe UK footballer of the Year from both the senior and the junior Diaspora National Teams. This award will be presented by former Caps United defender and Legend Carlos Max who is travelling from Zimbabwe to grace the occasion.
The event will also be covered by BBC World service and Zimbo Live TV who will stream it live on Facebook.
Caps United Chairman Lewis Uriri expressed his full gratitude to the UK legends for hosting this event. He confirmed that the club executive was in full support of this initiative and would like to foster a good working relationship with the legends.
Alois Bunjira, a Caps United legend and now radio host in Zimbabwe, also said he wished the legends success in organising the event; he called the idea Nobel.