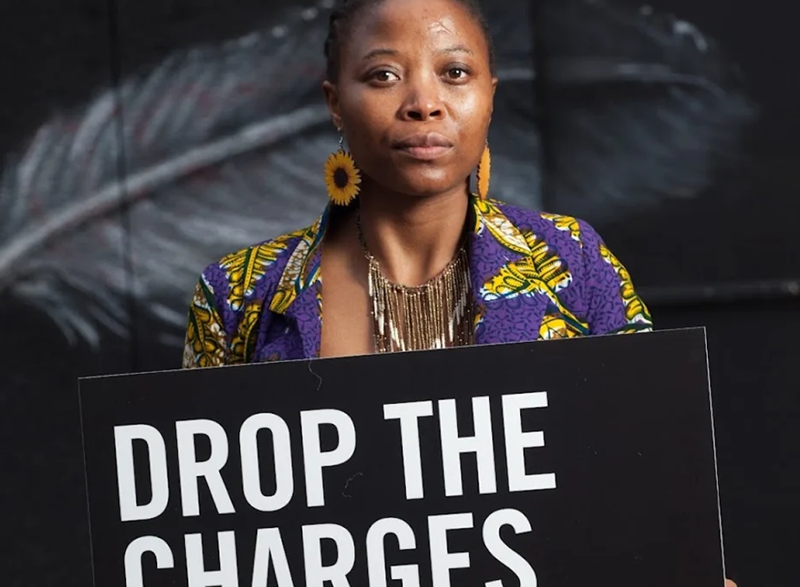 A Zimbabwean human rights activist who alleges she was subjected to harrowing torture after she was abducted by suspected state security services said she still lives in terror despite fleeing the country.

Speaking to The Independent in her first media interview since the alleged torture, Netsai Marova told of how she keeps her curtains closed and “panics” at the mere sound of footsteps.

The 27-year-old, who alleges she suffered torture in Zimbabwe in May 2020, said it has profoundly changed her life and made it very difficult for her to trust anyone as she explained she is always by herself and is due to spend Christmas alone.

“Even today, when I try to even share the story with anyone, it really breaks my heart,” Ms Marova added. “I live with scars every day because of my participation in politics. It has affected me a lot. Even now where I live, I don’t open my curtains. It has been a rollercoaster every day.”

Marova was allegedly detained alongside Cecilia Chimbiri and Joana Mamombe for going to a demonstration in lockdown – with all three women being senior leaders of the opposition party which is now called Citizens Coalition for Change CCC (formerly MDC Alliance).

The women, who were protesting against people not having enough food in lockdown, claim state security agents abducted them from the police for two days before going on to beat them and subject them to repeated sexual assaults and rape, as well as making them drink each other’s urine.

Amnesty International, a leading human rights organisation, told The Independent they are urging Zimbabwe’s government to drop all charges against the three women “immediately and unconditionally” and stop “all harassment against” them as well as other individuals who challenge “injustice”.

Ziyambi Ziyambi, justice minister, previously accused the women of making up the story to divert attention from the fact that they broke lockdown rules by attending a protest.

The three campaigners face criminal charges which accuse them of attending an illegal protest, fabricating their abduction, lying to police officers, and impeding justice – with a trial recently taking place and a verdict soon due.

Marova explained she has five pending cases before the court in Zimbabwe as she noted a warrant for her arrest was issued by the Zimbabwean authorities in September 2021.

She said she had escaped Zimbabwe to a European country she did not want to name to protect her safety – noting she has been given refugee status.

Marova said she was “really scared” when escaping Zimbabwe due to using a dangerous route but fortunately she was not stopped by authorities. Her escape was further complicated by the fact she did not have access to her passport which was confiscated by the state during their first arrest in May 2020.

“When I left, I had no choice, I wasn’t able to say goodbye to anyone,” the campaigner, who is living away from her mother for the first time, added.

The court separated her from the case so they could proceed with the trial against Cecilia and Joanna, Ms Marova added, explaining the trial took place in September and October with a ruling expected from the High Court in January on the continuation of the trial or its dismissal.

“We are dealing with a really unpredictable government and unpredictable judicial system. We can never be sure what is going to happen,” she said of the verdict. “But what I expect to happen is to see the High Court exercise a fair ruling and ensure we get justice.”

Discussing the alleged torture, the activist said one of her abducters “covered” her head with a “sack” inside a vehicle which resembled a mini bus which had no seats inside it just as they were leaving Harare Central Police Station, before the three of them went on to drive for a long period of time.

“That is when we realised we were being taken to a torture base,” she added. “There was a hole – like a pit – which we were told to get inside. That is where we were tortured and beaten.”

Marova said the men there were different to the ones who arrested them as she claimed a man ordered them to sing the same songs they had been singing at the protests.

She said they were ordered to sing until they were tired but they initially refused to do so until “one of the guys poured a bucket with a cold water-like substance on us” while another man poured water which contained a mud-like substance.

Marova said they were blocked from leaving the pit to urinate and were instead given containers to use – adding they were then forced to drink each other’s urine and excrement.

A bucket was thrown at them which landed with great force on her leg and she has since suffered a fracture on that leg, she added. She started crying before one of the men started using a gun to penetrate Cecilia, she claimed.

Marova said she later remembers the men taking them out of the pit and ordering them to get back in the car – adding she has gaps in her memory of the ordeal.

After travelling for a bit the men opened the doors and started throwing the women out of the moving car, Ms Marova said.

She noted they were eventually helped by a family who took them to their cabin and helped them contact their relatives and lawyers.

They were later admitted to hospital for three weeks due to their injuries, she added, noting they were forced to attend a makeshift court they set up in the hospital despite being badly injured.

Marova explained a few days after they were discharged from the hospital they were arrested by police and were placed in a remand prison at Chikurubi maximum-security prison for two weeks with an initial denial of bail.

Nkululeko Majozi, researcher for Southern Africa at Amnesty International, told The Independent: “Three women in Zimbabwe – Joanah Mamombe, Netsai Marova and Cecillia Chimbiri – were abducted, beaten, sexually assaulted and jailed for protesting the country’s poor socio-economic conditions during Covid-19 in 2020, and then charged with faking their ordeal.

“Their case is by no means an isolated incident – it is part of an ongoing campaign of harassment and intimidation by the Zimbabwean authorities against people who dare question those in power.

“Amnesty International is calling for Zimbabwe’s government to drop all charges against these women immediately and unconditionally, as well as end all harassment against them and others who speak out against injustice.”

Casting her mind back to the time in Zimbabwe after the alleged torture, Ms Marova said they continued to be under surveillance by state agents and she lost some of her friends over their fears they would be arrested for simply associating with her.

While Lord Oates, a Lib Dem who is co-chair for the All-Party Parliamentary Group for Zimbabwe, told The Independent: “Hearing at first hand Netsai Morava’s testimony of the abduction, torture and sexual assault that she and her fellow activists suffered, brought home to me the courage of all those who stand up for democracy and human rights in Zimbabwe.

“And the very high cost that they are made to pay by a party determined to hang on to power and wealth at any cost.

“To hear of the devastating trauma that has been inflicted on these three young women is truly shocking but their determination in the face of it is inspirational.”