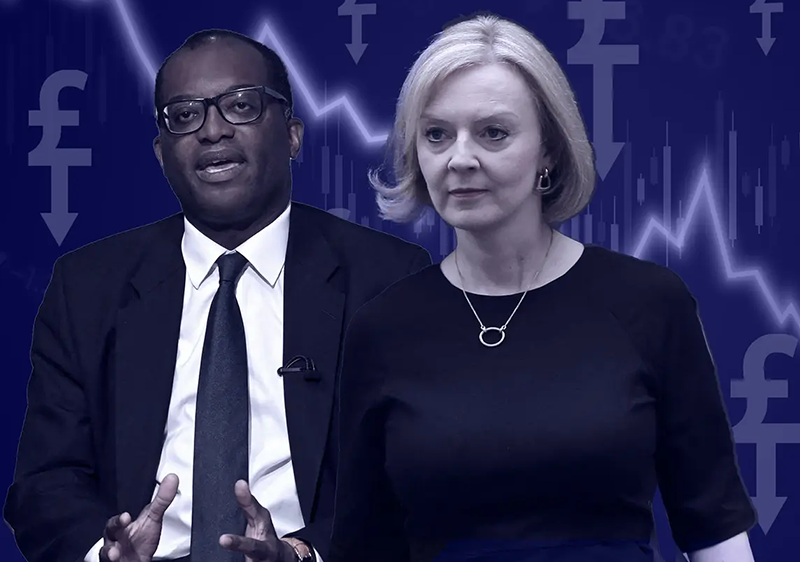 LONDON: The Bank of England took emergency action Wednesday to stabilize U.K. financial markets and head off a crisis in the broader economy after the government spooked investors with a program of unfunded tax cuts, sending the pound tumbling and the cost of government debt soaring.

The central bank warned that crumbling confidence in the economy posed a “material risk to U.K. financial stability,” while the International Monetary Fund took the rare step to urge a member of the Group of Seven advanced economies to abandon its plan to cut taxes and increase borrowing to cover the cost.

“Were dysfunction in this market to continue or worsen, there would be a material risk to U.K. financial stability,″ the bank said in a statement. “This would lead to an unwarranted tightening of financing conditions and a reduction of the flow of credit to the real economy.″

The move came five days after Prime Minister Liz Truss’ new government sparked investor concern when it unveiled an economic stimulus program that included 45 billion pounds ($48 billion) of tax cuts and no spending reductions. It also wants to spend billions to help shield homes and businesses from soaring energy price s, sparking fears of spiraling government debt and higher inflation, which is already running at a nearly 40-year high of 9.9%.

The British pound plunged to a record low against the U.S. dollar Monday following the government’s announcement, and yields on U.K. government debt soared. Yields on 10-year government bonds have risen 325% this year, making it much more expensive for the government to borrow to finance its policies.

The Bank of England’s plan to buy government debt helped stabilize the bond market, with 10-year bond yields falling to 4.235% in midday trading in London.

Yields, which measure the return buyers receive on their investment, had risen to 4.504% on Tuesday from 3.495% the day before the tax cuts were announced.

The pound traded at $1.0628 on Wednesday in London, after rallying from a record low of $1.0373 on Monday. The British currency is still down 4% since Friday, and it has fallen 20% against the dollar in the past year.

Opposition parties demanded Parliament be recalled from a two-week break to confront the economic crisis. But Truss and Treasury chief Kwasi Kwarteng stayed silent and out of sight, gambling that the economic storm will pass.

Northern Ireland Secretary Chris Heaton-Harris, one of the few government ministers on view Wednesday, said the government’s policies would “make my country richer and more prosperous.”

“I think you will find economic policy takes more than a couple of days,” he said.

On Monday, the Bank of England had refrained from an emergency interest rate hike to offset the slide in the pound but said it would be willing to raise rates if necessary.

But the bank’s next scheduled meeting is not until November, and the lack of immediate action did little to bolster the pound. The bank was able to step in immediately with bond purchases because its Financial Policy Committee has a mandate to ensure the stability of the financial system.

The British government said it has fully underwritten the central bank’s intervention on government bonds, known as gilts.

“The Bank has identified a risk from recent dysfunction in gilt markets, so the Bank will temporarily carry out purchases of long-dated U.K. government bonds from today in order to restore orderly market conditions,” the Treasury said in a statement.

The U.K. government has resisted pressure to reverse course but says it will set out a more detailed fiscal plan and independent analysis from the Office for Budget responsibility on Nov. 23.

Kwarteng met Wednesday with executives from investment banks including Bank of America, JP Morgan, Standard Chartered an UBS in a bid to soothe markets alarmed by its economic plans.

The central bank was spurred to act after volatility in financial markets spilled over into the broader economy, raising borrowing costs for the government, limiting mortgage options for homebuyers and forcing some pension funds to sell long-term government bonds used to manage risk.

Some analysts estimate that the recent spike in bond yields has added about 20 billion pounds to the cost of servicing the U.K.’s ballooning debt.

In addition, British mortgage lenders have pulled hundreds of offers from the market amid expectations the Bank of England will sharply boost interest rates to offset the inflationary impact of the pound’s recent slide.

Market reaction to the government’s plans also has exposed vulnerabilities in U.K. pension funds. In particular, some defined-benefit pension plans, where employers shoulder the risk of guaranteed payouts for their retirees, have been forced to sell long-term bonds to cover liabilities, creating the potential for a downward spiral in prices.