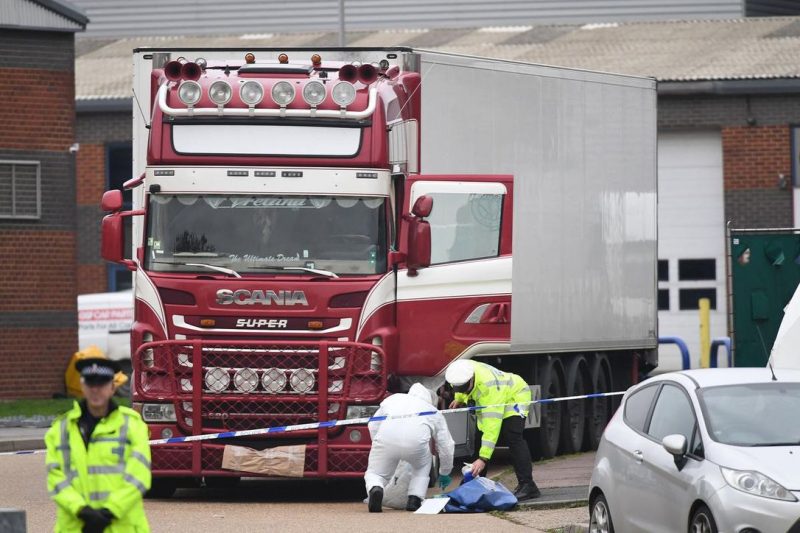 A British driver accused of the manslaughter of 39 Vietnamese migrants found dead in a refrigeration truck pleaded guilty on Monday to conspiring to assist illegal immigration.

Maurice Robinson, 25, appeared via video link at London’s Central Criminal Court from the high-security Belmarsh prison, southeast London, and pleaded guilty to two of the 43 charges levelled against him.

The bodies of eight women and 31 men were found in a refrigeration trailer on an industrial estate east of London in the early hours of October 23.

The trailer had earlier arrived on a cargo ferry from the Belgian port of Zeebrugge.

Wearing a blue sweatshirt and speaking to confirm his name, age and nationality, Robinson pleaded guilty to conspiring with others “to commit an offence of assisting unlawful immigration”.

He also admitted to the acquisition of cash that came from criminal conduct.

Judge Andrew Eadis ordered that Robinson’s alleged co-conspirators could not be named.

The truck driver did not enter pleas on the other charges and is due to appear before the same court again on December 13.

Another lorry driver from Northern Ireland was also ordered to appear at the Old Bailey on the same date after a separate court hearing.

Christopher Kennedy, 23, is accused of conspiring to arrange or facilitate the travel of other people with a view to exploitation.

Kennedy was not asked to enter pleas during the hearing at Chelmsford Magistrates Court and spoke only to give his name, age, address and to state his nationality as British.

Police said late Monday another man had been arrested in east London “on suspicion of manslaughter, conspiracy to traffic people and conspiracy to assist unlawful immigration”.

The 36-year-old suspect was being questioned in custody.

Ten teenagers, including two 15-year-old boys, were among the bodies discovered in the trailer.

Emergency services were called to an industrial estate in Grays, Essex shortly after the lorry arrived on a ferry from Zeebrugge in Belgium.

Many of the victims were from a poor region in central Vietnam, where the main source of income is fishing, farming or factory work.

Many families took on thousands of dollars of debt to send their children to Britain, in the hope they would land good jobs and send money back to pay off the loans.

The incident has laid bare the dangers of illegal migration in Britain, where Vietnamese nationals have often found work in nail bars or illegal cannabis farms.