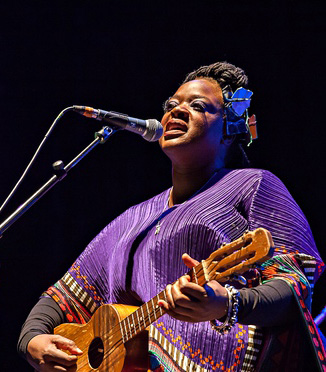 AN artist releasing their debut album in their early forties? In an industry governed by the cult of the young, Eska Mtungwazi is something of an anomaly. But the Zimbabwe-born and London-bred session musician turned solo artist has a good reason for waiting so long: simply, that it’s taken her that time to discover what she wanted to say.
“I kept upping the ante with every year that would go by,” she explains.
“I’ve been involved in three Mercury-nominated albums, and with every collaboration that you do that’s successful, you might get a press mention from being a side player in something.
“So, people start putting this bizarre pressure on you, saying, ‘You should do an album now, you’re getting older, the press are talking about you and that’s going to go away’.
“No one is saying, ‘Have you got anything creative to say? Have you made anything that’s worth putting out that you feel proud of?’
“I’m old enough to know that it was a long time coming and that’s OK, I’m fine with that. If anything, it’s the music industry that gives you the perception that it’s almost impossible after you’re 25 to have anything creative to say, which doesn’t make any sense.”
In any case, it was worth the wait: after years in development, her self-titled debut album was finally released in April to rave reviews. Critic Howard Male called it a record “sure to be deemed a classic in years to come”.
Written, produced and arranged by Eska, with help from the likes of electronica maverick Matthew Herbert and The Invisible’s David Okumu, what’s in part so extraordinary about it is just how difficult it is to pin down: during the course of 10 tracks it straddles jazz, soul, folk-pop, and electronica, with floaty melodies given grounding by funky bass lines and gospel-like choruses, and she has found herself compared to everyone from Joni Mitchell to Erykah Badu.
However folk is the genre Mtungwazi relates to closest, she says. Meanwhile her lyrics see her balance the personal and the mythological. The result, with Eska playing multiple instruments including piano, violin, and guitar as well as singing, is as beautiful as it is unpredictable.
ESKA: Shades of Blue