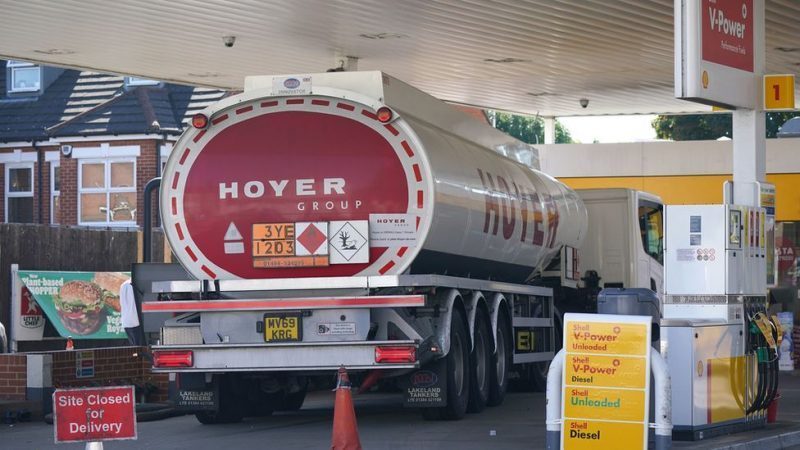 A BRAWL at an Esso fuel station, said to be between two dads and their sons, exploded amid petrol shortage fears.

The four men traded blows during a shocking fight in the forecourt of an Esso petrol station in Chichester, West Sussex, last night.

It comes as the president of the AA Edmund King assured Brits there is “plenty of fuel at the source” and no need to panic buy, with a lack of lorry drivers being blamed for disruption to fuel supplies.

Footage of the scrap shared on Facebook shows a dad and son confronting another dad and his son over fuel, according to a social media post.

The men are seen yelling at each other before one older man grabs the other and shoves him against a car.

One of the younger men then plants a punch on him – before the other younger man lands a vicious kick on his opponent.

Both pairs of men then scrap in full view of other drivers as Britain’s petrol fears erupted into full-scale violence.

The two older men break out into a scuffle on the bonnet of a car while the other pair fight on the floor.

During a brief lull in the fight, one younger man flicks back his long hair before continuing to exchange kicks and punches.

As they wrestle on the ground, one is heard pleading “leave it out” – as the camera reveals the other men continuing to grapple with each other.

The tussle lasts for at least a minute with an onlooker cheering the men as they beat each other up on the garage forecourt.

Finally, the brawl ends, with one man seen putting his arm around another.

Meanwhile, two groups of men were seen “screaming” at each other before one group hurled stones as the other fled in a van at a Shell garage in Portsmouth,

Another driver told The New: “I witnessed a tussle on the forecourt between two groups of men, screaming and shouting at each other.

“One group got into their van and drove off out the city as the other group gave chase and hurled stones at the retreating van. Madness!”

It comes as drivers are set to be hit with a £30 limit on fuel after panic buyers queued at petrol stations across the country amid shortage fears.

Police have been forced to marshal motorists after they raced to forecourts to fill their tanks up.

And selfish drivers have started filling up jerry cans with fuel after queuing from the early hours of this morning.

Transporting petrol around in a car boot also has the potential to turn your vehicle into a fireball, experts warned.

“If you are filling up six cans, you are potentially stopping the police, ambulance service and organisations such as ourselves who need to get to people in emergencies” Simon Williams, RAC Fuel spokesperson.

A Health and Safety Executive spokesman said: “It is a highly flammable liquid and can give off vapour which can easily be set on fire and when not handled safely has the potential to cause a serious fire and explosion.”

Simon Williams, RAC fuel spokesman, added: “If you are filling up six cans, you are potentially stopping the police, ambulance service and organisations such as ourselves who need to get to people in emergencies.”

The government has now urged drivers to “carry on as normal” amid the chaotic scenes.

And hundreds of petrol stations are now planning to impose a £30 fuel cap per driver to ensure everyone has a “fair chance to refuel” after an “unprecedented” scramble for fuel from drivers.

The EG Group, which has 341 petrol stations in the UK, confirmed the emergency services and lorry drivers would not be affected.

A spokesman said: “Due to the current unprecedented customer demand for fuel and associated supply challenges we have taken the decision to introduce a limit of £30 per customer on all of our grades of fuel.

“This excludes HGV drivers and emergency services due to their vital role at this time.

“This is a company decision to ensure all our customers have a fair chance to refuel and to enable our sites to carry on running smoothly.

“We kindly ask everyone visiting our sites to treat our colleagues, supply chain partners and customers with respect during these very challenging times.

“All of EG Group’s UK sites remain open and operational to serve customers.”

Hundreds of motorists blocked roads yesterday after fears over a fuel shortage due to a lack of HGV delivery drivers sparked panic buying in Britain.

The Road Haulage Association estimates there is a shortage of about 100,000 HGV drivers, with the pandemic and Brexit exacerbating the problem.

Cops were even scrambled to forecourts to manage queues and keep traffic moving as tensions flared.

Up to 100 BP petrol stations have been affected by the loss of fuel with around 20 of the company’s 1,200 forecourts closed.

Boris Johnson has now agreed to temporarily loosen immigration rules so foreign HGV drivers can work in Britain to help with the crisis.

But No10 warns any measures introduced would be “very strictly time-limited”.

Ministers are also said to be drawing up emergency plans to bring soldiers to drive tankers to forecourts suffering supply issues.

Transport Secretary Grant Shapps has urged drivers not to panic buy and told drivers to “carry on as normal”.

A Downing Street spokesman said: “We have ample fuel stocks in this country and the public should be reassured there are no shortages.

“But like countries around the world, we are suffering from a temporary Covid-related shortage of drivers needed to move supplies around the country.

“We’re looking at temporary measures to avoid any immediate problems, but any measures we introduce will be very strictly time-limited.

“We are moving to a high-wage, high-skilled economy and businesses will need to adapt with more investment in recruitment and training to provide long-term resilience.