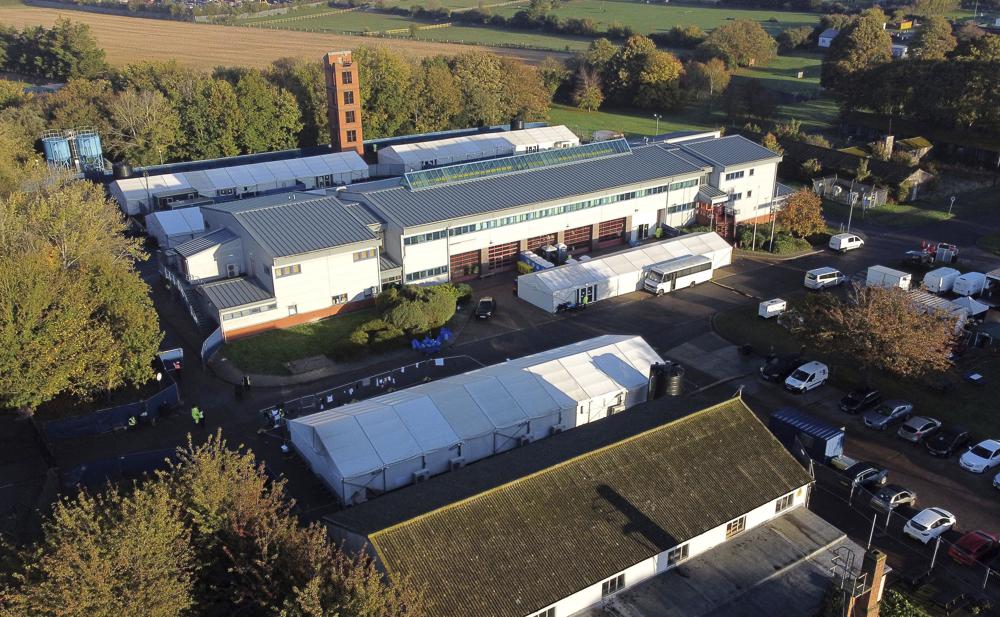 LONDON: Britain’s interior minister on Monday defended the government’s treatment of newly arrived migrants after critics blamed her for the “wretched” conditions endured by thousands of people at an overcrowded center for asylum-seekers.

Hundreds of people who crossed the English Channel in small boats have been moved to Manston, a former airfield in southeast England, after another processing center was hit with gasoline bombs on Sunday by an attacker who then killed himself. There already were 3,000 people at the facility, which is intended to hold about half that number.

Lucy Moreton, who heads the Immigration Services Union, said the the number of people at Manston had reached 4,000 and it was “catastrophically overcrowded.”

Home Secretary Suella Braverman defended her department’s behaviour, saying officials were “working tirelessly to improve facilities” for asylum-seekers. But the right-wing politician also referred to small-boat crossings as “the invasion of our southern coast” and said “illegal immigration is out of control.”

Manston is supposed to be a temporary processing centre where new arrivals spend 24 hours before moving on to longer-term accommodation, but refugee groups say some people have been stuck there for weeks.

Chief Inspector of Borders David Neal, who recently visited, said last week that conditions were “wretched.” He told lawmakers there had been cases of diphtheria and “it’s a really dangerous situation.”

Braverman, who has been in the job for a matter of weeks, is a contentious figure, already under pressure for her use of insecure private email. Her hardline approach has sparked criticism from within the governing Conservatives as well as from the opposition.

Conservative lawmaker Roger Gale, who represents the Manston area in Parliament, said the situation there was a “breach of humane conditions.” He accused Braverman of deliberately worsening conditions at Manston by refusing to book hotel rooms for asylum seekers.

“Up until about five weeks ago the system was working as it was intended to, very well indeed,” he said. “It’s now broken and it’s got to be mended fast.”

Braverman denied she had prevented migrants from being moved to hotels.

Braverman — who supports the expulsion of people who enter the U.K. without authorization — said she had been “appalled” to find out that that 35,000 migrants were staying in hotels “at exorbitant cost to the taxpayer.” But she insisted that “I have never blocked their usage.”

The U.K. receives fewer asylum-seekers than many European nations, including France and Germany. But there has been a sharp increase in the number of people trying to cross the channel in dinghies and other small craft. Some 40,000 have made the hazardous journey across one of the world’s busiest shipping lanes so far this year, up from 28,000 in all of 2021 and 8,500 in 2020.

Dozens have died, including 27 people in November 2021 when a packed smuggling boat capsized.

Britain and France have wrangled over how to stop the people-smuggling gangs that organize the journeys.

Britain’s government has announced a controversial plan to send people who arrive in small boats on a one-way journey to Rwanda – a plan it says will deter people from crossing the Channel and break the business model of smuggling gangs. Critics say the plan is immoral and impractical, and it is being challenged in the courts.

Braverman, who was appointed in September by ex-Prime Minister Liz Truss, is an enthusiastic supporter of the stalled Rwanda plan and has been accused by critics of demonizing migrants.

The government says problems are being caused by a surge in migrant numbers, but critics accuse the government of not processing asylum applications fast enough.

“The Home Office took just 14,000 initial asylum decisions in the last 12 months compared to 28,000 six years ago, 96% of the small boat arrivals last year have still not had a decision, and initial decisions alone are taking more than 400 days on this Conservative government’s watch,” said Labour Party immigration spokeswoman Yvette Cooper.

Braverman is also under fire for sending sensitive government documents from her private email account, a lapse that led to her resignation in the final days of Truss’ brief premiership. She was reappointed last week when Prime Minister Rishi Sunak took office after backing his bid for the Conservative leadership.

Braverman said she did not share “any information relating to national security, the intelligence agencies, cyber security or law enforcement,” but is facing accusations that she did not immediately come clean about the lapse. She also has acknowledged sending government documents to her private email on six other occasions.