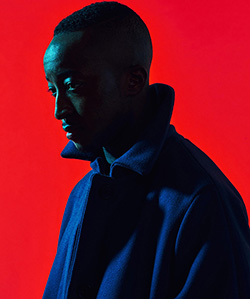 UK artist RATIONALE, quickly developing as one of 2016’s most vital breaking artists, will release his self-titled debut album in September via Warner Bros. Records.
The album features lead single “Palms,” which premiered last night as BBC Radio 1’s “Hottest Record,” as well as three of the tracks that have been pivotal to RATIONALE’s rise so far: “Fast Lane,” which debuted at #2 on the Spotify Global Viral Chart and #1 on Hype Machine.
It will also feature the striking “Fuel To The Fire,” and most recent release “Something For Nothing,” which combined have earned RATIONALE over 14 millionlistens on Spotify.
RATIONALE recently made his television debut with show-stealing performances of “Fast Lane”and “Fuel To The Fire” on Later… With Jools Holland.
The self-titled debut album will be released on digital, CD, and vinyl formats, and is available for preorder now, with “Palms” and “Something For Nothing” as instant grats when you preorder the album.
Throughout the twelve-track album, RATIONALE creates bold, genre-hopping songs that are rich with soul and heartfelt emotions. His lyrics reflect real life stories that are amplified for dramatic effect, and his productions blend classic arrangements with cutting edge sonics.

His music has already earned him support from influential fans such as Pharrell Williams and Elton John, with early press love from Noisey, The Hype, and Pigeons &Planes who say “Rationale has been killing it left, right, and center.”
RATIONALE was born in Harare to a mother with a diverse record collection which included everything from Fela Kuti to Meat Loaf. Later settling in London, RATIONALE subsequently discovered late ’90s rock and indie, and soaked up the eclectic influences that are now found in his music.
His most striking strength is his soaring baritone vocal that simultaneously evokes Drake and Morrissey, but it’s a voice that’s instantly recognizable as his own.
Advertisement

While he only began touring within the past year, RATIONALE has already sold out shows across the U.K. and Europe and is currently in the midst of his debut North American headline tour.
The tour kicked off last night with a sold out show in Los Angeles, and includes stops in San Francisco, Chicago and New York. A full list of dates is below.
NORTH AMERICAN TOUR DATES
June 2 Los Angeles, CA Bootleg Theater *SOLD OUT*
June 5 San Francisco, CA Popscene Presents @ Rickshaw Stop
June 7 Chicago, IL Schubas Tavern
June 8 New York, NY Mercury Lounge *SOLD OUT*
June 9 Brooklyn, NY Knitting Factory
June 11 Toronto, Canada Bestival