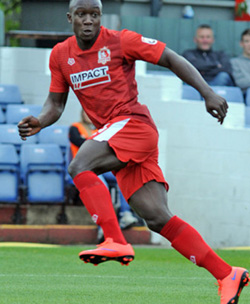 CLIFF Moyo’s unorthodox route to Halifax has taken him from Zimbabwe to The Shay via Staffordshire University.
The right-back didn’t start playing properly until he was 16, and since then has combined his football career with doing a degree in sports science.
Moyo didn’t arrive in the UK until he was nine, and as a result, believes he has had to work harder than most players to forge a career in the game.
“I grew up in Zimbabwe and lived there until I was nine, so I grew up kicking bottles with bare feet, that was my kind of football,” he said.
“My mum and dad lived in England – my dad was a musician so he travelled a lot.
“He realised he preferred the life over here but I didn’t want to come over because I was getting spoilt by my nan and granddad so I wanted to stay over there for a few more years.
“A lot of the other lads had perfect pitches and grew up in academies, so I’ve had to work for what I’ve got.
“I’m proud of myself for getting where I have because I never thought I’d be at this level.
“I never take anything for granted.”
Moyo admits he was floating about in the game until joining Alfreton last summer, who he credits with developing him on and off the pitch.
“I didn’t start playing properly until I was 16, I never really took it that seriously,” he said.
“I was at college doing bits and bobs, but there was a guy there who liked me as a player and took me down to play for the Staffordshire County team.
“Then I got involved in the national set-up because there happened to be an England scout who’d seen me play.
“I ended up going to Barrow when I was 18. I started taking it a bit more seriously when I realised I could do something!
“I wasn’t earning that much at Barrow so I went to Staffordshire University and did part-time football at Nantwich and other clubs in the area.
“It was a hard three years. I spent hours and hours in the library, and if I wasn’t there I was at training.
“Last season I wanted to start taking it more seriously again so I joined Alfreton and I played a lot of games and thought I did well.
“The club were great with me, they took me on and I got a lot of games there.
“That made me stronger as a person on and off the pitch.
“They had a young squad as well so we had to help each other out and got me out of my shell.Advertisement

“I used to be quite shy and quiet but I scream on the pitch now.”

Moyo was trained by Paul Scholes, Didi Hamann, Danny Mills and Ryan Giggs as part of their coaching badges at Manchester Metropolitan University.
“That was incredible,” said Moyo. “You’d look at them and think ‘I’ve been you on Fifa!
“It was surreal, watching them on telly and then having them speaking to you. But they were all really down to earth.
“When you asked for advice they all said just work hard because you never knew who was watching.”
Moyo was a left-winger until an intervention by another former Manchester United legend.
“I was a football academy college and Andy Cole was taking a training session as part of his PFA badges,” Moyo explained.
“He stuck me at centre-half and I told him ‘I don’t play there’, but he just told me to go in there as cover.
“After the session he asked me where I played and I told him left-wing. He just said ‘no, you’re a centre-half now.”
“When I went to Barrow I realised I was too skinny to play against all these big forwards and moved to right-back.
“I thrive on one v one defending. I thrive on not letting a winger beat me.
“My playing style is getting up and down the pitch as much as I can.
“Technically I’m not great but I don’t look out of place.
“Because I didn’t grow up in an academy I’ve had to work twice as hard to get my technical ability.
“You can tell which players have been at academies because technically they’re fluent.
“I’m not saying I’m terrible but within myself I know I can do better.”
This article was first published by the Halifax Courier.