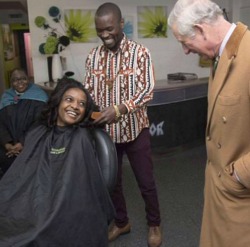 A ZIMBABWEAN hairdresser based in Leicester, UK, had a belated New Year’s present when, on a rather ordinary day, a smiling Prince Charles stepped inside his shop to tell him he was “doing a great job”.
According to Wandi Sogutsa, his Sogscissor Hair is in Leicester along Narborough Rd, “the most diverse street in the UK”.
Prince Charles visited the shop on January 25.
“The Prince’s visit was such a surprise, not only for myself but for my clients as well,” said Sogutsa.
He added, “I felt honoured to be selected out of over 200 shop units… He (Prince Charles) is such a humble man who took his time to chat with myself, colleagues and clients and has a good sense of humour.
“He was impressed that I started my business five years ago through his trust. And also the fact that my colleague Philip Matizanhau and I went to Prince Edwards High School in Harare.
“He wished us well with the business and told us we are doing great job”.
In Zimbabwe, Prince Charles is mostly remembered for his attendance at the 1980 Independence celebrations where he represented the Queen, his mother. The Prince is also an artist.