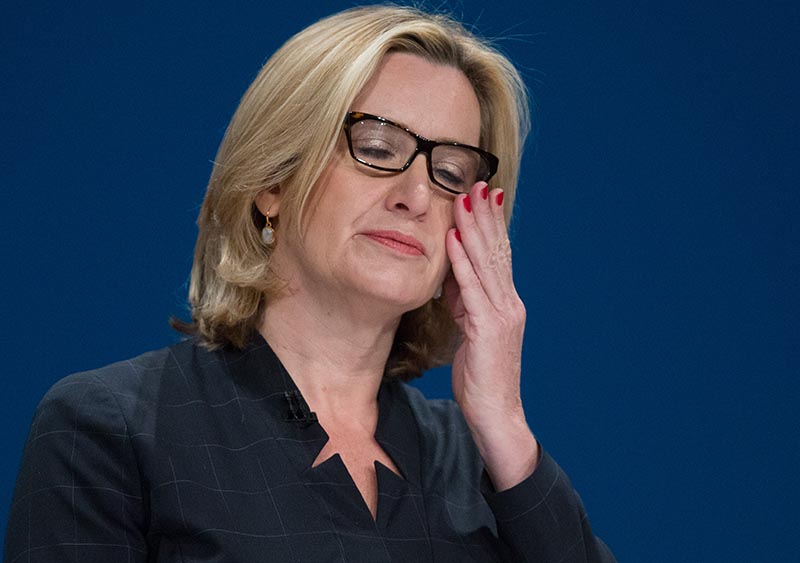 Rudd stood down amid claims she mislead lawmakers on whether her department held targets for removing illegal immigrants in Britain.

“The prime minister has tonight accepted the resignation of the home secretary,” said a spokesman for May’s office.

Rudd telephoned May to inform her of the decision following days of intensifying pressure over the immigration issue and increasing calls for her to quit.

That had followed weeks of scrutiny of her handling of another Home Office scandal: the targeting of the so-called Windrush generation.

Commonwealth citizens primarily from the Caribbean who came to Britain in the post-World War II decades had been wrongly threatened with deportation, provoking an outcry when it emerged earlier this month.

Their erroneous targeting stemmed from a “hostile environment” immigration policy pioneered by May when she was interior minister between 2010 and 2016, and then continued by Rudd.

The opposition Labour Party had accused Rudd of incompetence and being a “human shield” for May.

“This was inevitable, the only surprise is that it took so long,” said shadow interior minister Diane Abbott following Rudd’s resignation.

“The architect of this crisis, Theresa May, must now step forward to give a full and honest account of how this inexcusable situation happened on her watch.”

Rudd’s decision to step down will come as a severe setback for the Conservative leader, who publicly declared her “full confidence” in Rudd as recently as Friday and faces potentially bruising local council elections across England on Thursday.

May could see the Tories wiped out in London, where several once-safe Conservative councils could flip to Labour.

As the Windrush scandal intensified, Rudd told a parliamentary committee the Home Office did not keep targets for the number of illegal immigrants removed from Britain.

While she maintained she was unaware of such measures, there was mounting evidence that targets did exist and were known about within her department, making her position increasingly untenable.

Rudd had been due to make another appearance before parliament on Monday, but instead opted to resign late Sunday.

The MP for Hastings on England’s south coast, who had led the Home Office since 2016, was seen as a moderate on the European Union and a balancing force in a cabinet made up of several big-name pro-Brexit figures, such as Foreign Secretary Boris Johnson and Environment Secretary Michael Gove.

Both men were quick to praise her on social media following news of the resignation.

“Really sad to lose @AmberRuddHR from Cabinet. A fine colleague who did a great job during last year’s terrorist attacks and cares deeply about the people she serves,” Johnson tweeted.

Gove said he was “so sad” about her departure, adding on Twitter “she was a huge asset… I hope Amber will be back soon — we need her.”

He wrote: “The Government just got a bit less human.”