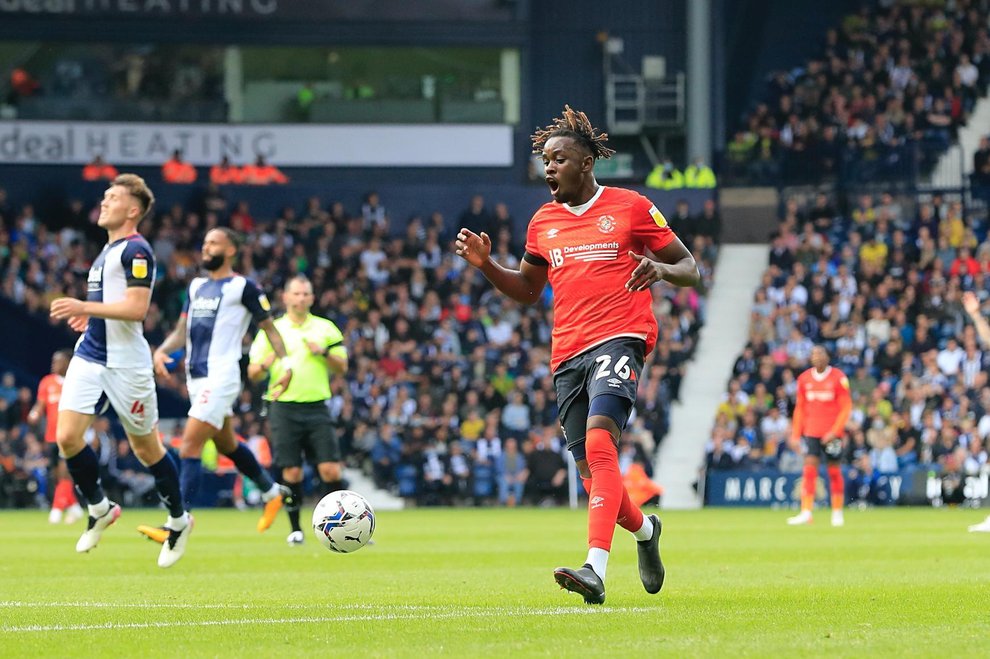 Although proud to see another of his Hatters squad gaining international recognition, Luton boss Nathan Jones admitted that forward Admiral Muskwe’s call-up to the Zimbabwe squad for the upcoming Africa Cup of Nations isn’t ‘ideal.’

The 23-year-old, who was born in Harare, moving to this country at the age of three, flew out to Cameroon in the week to join up with his fellow team-mates for the tournament that starts tomorrow.

It had been due to be played in June and July 2021, but with the weather in Cameron declared ‘unfavourable’ at that time of year, the competition was moved to January, meaning a number of English clubs, particularly in the Premier League, are without some of their star talents.

With Zimbabwe side playing in their third successive finals, Muskwe is relishing his chance to be involved, although it does mean he will miss a number of Luton matches.

The forward won’t feature in the FA Cup third round clash against Harrogate Town tomorrow, plus Championship encounters with AFC Bournemouth, Reading and more than likely Sheffield United too.

If Zimbabwe reach the last 16, Muskwe could also be away when Town host Bristol City, while should they make it all the way to the final, he wouldn’t return until after the trip to Peterborough United in early February, potentially missing the home game with Barnsley too.

Speaking his attacker’s involvement, Jones said: “It’s difficult as I know there’s been a lot said about the Africa Cup of Nations and we’re very proud of our internationals, it’s just not ideal.

“We’re very proud of Ade, when he signed, we knew that he had a proud Zimbabwean heritage.

“His father works there and I had a big conversation with his dad prior to him signing, as, with the greatest respect, a lot of African families, their dad’s a big influence.

“So we know that his dad is very proud, and we just hope that he does really well, comes back injury free.

“A lot gets mixed up and misconstrued, and it’s probably the least ideal time to have a tournament, but that’s not to say we’re not proud of the internationals.

“But when you go and potentially, they could miss five, six, seven games, that’s a hindrance and that’s why managers sometimes speak out against it.

“I’m sure most managers are proud of their players when they’re internationals, we are here.

“It’s just the timing of the tournament isn’t ideal if you are a Premier League or Championship manager, because you can potentially lose some of your best players and at a time when fixtures are coming thick and fast.”

Muskwe who moved to Luton for an undisclosed fee from Leicester City in the summer has had a stop-start beginning to his Town career.

With the signing completed late in pre-season, it meant he took a while to get up to speed, also suffering a hamstring injury at Blackburn Rovers which has limited the forward to 13 Championship appearances and just four starts.

Prior to Christmas, Muskwe came off the bench to grab an assist in the 3-0 win at Blackpool and then started the following 1-1 draw with Fulham, impressing with his direct approach against the promotion favourites

However, with four games cancelled due to Covid outbreaks, it means Muskwe won’t get the chance to showcase his ability in an orange shirt for a while, although he did declare Town fans would see the best of him when returning to Kenilworth Road after the tournament.

On his start to life as a Luton player, Jones added: “It’s been the story of his time here really as he came in late in pre-season, picked up a few little things, then it was Covid, so he’s never had the continuity.

“Now he’s training, he’s been doing fantastically well, played in the last two games and then we have four games called off, so he hasn’t been able to play in those.

“Then, he goes away so it’s been a real stop-start time for him, which is not ideal.”