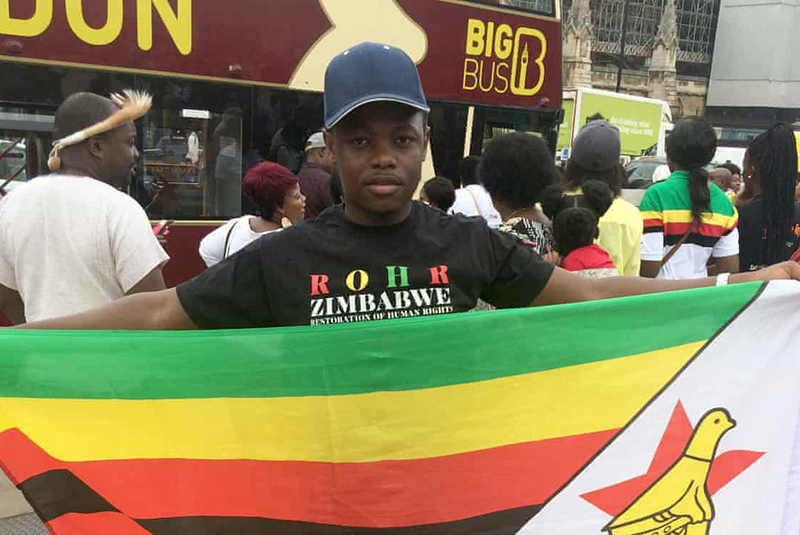 Human rights organisations have accused the Home Office of breaking international law after it decided to deport a Zimbabwean member of the opposition party whose life would be in danger if he returned home partly because his brother fought in the British army.

A senior British politician has written to the home secretary to say that if the deportation leads to Blessing Goronga’s arrest or persecution, it would be “intolerable … an eternal blot on Britain’s record”.

Goronga, a human rights activist and youth leader at the Movement for Democratic Change (MDC)’s branch in Leicester, will be deported on 13 September despite evidence from Amnesty, the Crisis Group and the Zimbabwe Restoration of Human Rights organisation (ROHR) that his life could be at risk if he returns.

“The decision of the Home Office must be challenged and information placed before the courts to show that sending back Blessing to be subjected to political persecution is in violation of international law,” said Lloyd Kuveya, Amnesty’s Zimbabwe researcher and campaigner.

Lib Dem peer Dick Taverne has written to Sajid Javid, to ask him to postpone Goronga’s deportation. “One of Goronga’s fellow activists in the MDC was killed. Others have been kidnapped,” he wrote. “Surely it is intolerable that when there are substantial grounds for believing that his return will endanger his life, he will be sent back. If he is arrested or worse, it will be an eternal blot on Britain’s record.”

Six people were killed in violent protests in Harare after the election on 30 July, when the Zimbabwe National Army indiscriminately shot and assaulted civilians. According to a report by the Zimbabwe Human Rights NGO Forum covering the period from 1 to 9 August 2018, there were a total of 199 violations by the military or suspected security personnel, including torture, including sexual torture, injuries, assaults, arbitrary arrests and 16 abductions – five of whom were later found having been tortured.

On 3 September, Zimbabwean authorities intensified their crackdown on opposition MDC Alliance party members by arresting leaders of the party’s youth assembly and charged them with committing public violence.

Emmerson Mnangagwa vowed a “brighter tomorrow” for Zimbabwe after being sworn in as president on Sunday. He also announced an inquiry into the violence following his election. But Kuveya said: “The situation in Zimbabwe at the moment appears calm but underneath there is deceptive political persecution. We are currently handling four cases of opposition party and civil society activists who have fled Zimbabwe in fear of the political persecution.”

“A list of people most wanted has been drafted by the military intelligence who are going round intimidating and beating up people suspected of having rejected the results of the election and incited protests, so this is no the time for someone like Blessing to be going back to Zimbabwe.

“The risks for Zimbabweans are still there,” he added. “The military is essentially in charge of the country and the reprisals for activists opposition supporters are quite dire.”

Blessing, who is training to be a mental health nurse in the UK and lives with his two brothers in Swindon, both registered nurses, has been in the UK since 2015 but has been held in detention since 13 August.

“I fear for my life mainly because of the ongoing crackdown on opposition activists like me,” he said from the detention centre. “I fear that if I am returned to Zimbabwe, I will be arrested, tortured or killed because I have campaigned vigorously for free, fair credible elections.

“I am one of the human rights activists who campaigned and held interviews at the Parliament House about stopping the removals of failed asylum seekers. I criticised the unfair political playing field in favour of Zanu PF. My name is all over the internet criticising the ruling party. MDC supporters and activists like me have been abducted and persecuted in Zimbabwe since the election. I am scared that if l am deported back home with my profile which is all over the internet, l will be persecuted.”

In a letter to the Home Office, the MDC confirmed that Goronga played a key part in their campaign and would be in danger if he returned to Zimbabwe.

“Blessing has been an active member in Zimbabwe and the UK. He migrated to the UK and applied for asylum fearing persecution from the state agents. MDC Alliance leaders, supporters and activists are being abducted, arrested and some have gone into hiding fearing for their lives all over the provinces,” wrote Gift Siziba, from the MDC president’s office.

“If Blessing is to be returned to Zimbabwe with his high MDC Alliance profile, his life will be in danger,” he added.

Ronald Mureverwi, chair of the ROHR said. “Ever since Blessing left the country to seek refuge in the UK, due to forced circumstances threatening his security and welfare, there have been persistent visits by unknown people seeking his whereabouts at his family home.

“We have received reports that Blessing is on the list of wanted persons in connection with contravening the constitution. His family have expressed fears about his safety if he finds himself within the Zimbabwean borders,” he added.

Piers Pigou, Crisis Group’s senior consultant for southern Africa, said:“In light of post-election reports of violations that have come from very credible sources that the UK government have previously relied on, it would be prudent to take a wait and see approach [to deportations of those claiming political asylum],” he said.

Dr Frances Lovemore, director of a local Zimbabwean NGO, the Counselling Services Unit, also advocated a pause before any decision.

“I think in the current climate the UK should delay the return for a month or two until we can evaluate the scale of the clampdown and if they are going to persist with this agenda,” she said. “No one is monitoring the returnees; this hasn’t happened for the last few years.”

The Home Office said: “All applications are considered on their individual merits and in accordance with the immigration rules.”