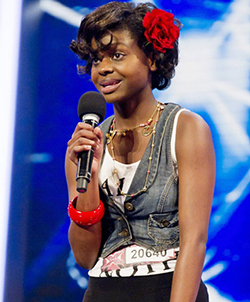 UK: SHE had all but disappeared for six years – leading Xtra Factor presenter Rylan Clark to launch a nationwide campaign to find her on the show.
The weekly appeal sparked the hashtag #findgamu and over the last few weeks, hundreds of viewers helped to try and find the ‘missing’ singer with no luck.
But now the search is over… as The Sun Online has finally found former X Factor star Gamu Nhengu.
We can exclusively reveal that the 24-year-old is currently working as a stylist in TopShop and after time away from the music scene, she’s gearing up to make her comeback in a band.
Gamu appeared on the singing contest back in 2010 but lost her place to Katie Waissel – which many consider to be one of the biggest injustices of all time on the show.
At around the same time Gamu – who was 18 at the time – faced a public battle to stay in the country as she risked being deported back to Zimbabwe.
Since then – despite a brief comeback attempt in 2013 – she has gone very much under the radar… until now.
In an exclusive image obtained by The Sun Online the singer can be seen surrounded by colleagues in the famous high street store.
These days she looks a far cry from the shy teen who first appeared on the reality show and she’s clearly developed a keen sense of style.
She also appears to have found a ‘voice’ and is keen to shed her former X Factor image.
Returning to social media for the first time in years, she revealed: “To be completely honest I was trying very hard to pretend that the past 6 years had not happened.
“If you stopped me in the street and asked me if I was ‘Gamu from X factor’ I 99% probably would’ve said ‘no’ . And honestly if you do it now it might still be the same.
“I’m 24 now and I see myself as a baby when I entered into the music industry, something I was wholly unprepared for. I wish someone had pulled me to the side and forewarned me that it was 80% sleepless nights and 20% a bit of a giggle.Advertisement