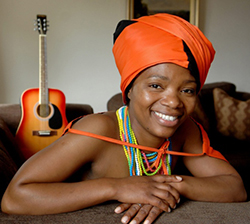 UK: Southburgh World Music Festival returns this weekend with a globe trotting line-up that ranges from a Chinese opera singer to a ‘Cavacha’ dance music band from central Africa.
The popular vibrant and colourful global beat family-friendly Norfolk festival is taking place at Burton Manor Barns at Southburgh from July 28-30 with a hugely diverse range of music, artists, dance and food from all over the world.
The festival is organised by Norfolk-based Zimbabwean singer, dancer and musician Anna Mudeka, and once again proceeds will be going to the Mudeka foundation who will be donating the money to schools and feeding projects in Zimbabwe.
She said: “Our aim is to bring a slice of the world to the heart of Norfolk.
“It’s a wonderful space where people of all ages and nationalities can come and share experiences through music, theatre, food and crafts. It is an ideal setting for children to run around in, and to make new friends, while parents can either chill out or take part in the activities available, and maybe even discover your inner child again.”
Headlining the Saturday night will be nine-piece band Zong Zing All Stars from Central Africa who play Cavacha dance music and with their irrepressible rhythms and driving percussion, intricate guitars, sweet harmonies, and acrobatic dancers. Add hints of the Soukous sound from the Democratic Republic of Congo and early Jamaican reggae they are bound to have the audience up and dancing.
Lovers of classical and opera singing are in for a treat as charismatic Chinese singer Duan Zhen Zhen will also be gracing the main stage. She trained in China as a classical singer for two years before joining the Chinese army. She moved to the UK 12 years ago where she rediscovered her passion for singing.
Acclaimed British Pakistani singer Samia Malik will be bringing her new work Azaadi: Freedom with songs in Urdu and English accompanied by her sitar, dilruba, violin, harmonium, bass guitar and tabla.
The fringe festival stage on the Saturday will also include a wide cross section of music from around the world. Headlining will be Zaramo who will be bringing their Balkan songs and rhythms to the festival, while The Old Stuff band will add a touch of bossa nova and Latin American tunes, The Mahatmas bring some psychedelia to the festival and the Doohickies are playing an unplugged set.Advertisement

Latin music DJ John Soloman, who will also be running a salsa dance workshop will headline the stage and there will be a debut DJ set from Jay Hrtn.
Workshops will include Bodhran, African, and Samba drumming, Urdu, hip hop, rap and Mbira singing, and Balkan and Zimbabwean dance workshops.
The weekend begins on the Friday evening with storytelling in the barn from Tilly the Talespinner who weaves story magic to fire the imagination, while there will be a documentary film charting the life and music of former Osibisa and Kete Warriors man Mac Tontoh including unseen interviews before an open mic session.
The genre-mixing musical line-up also includes local Killamonjambo with their infectious mix of ska, funk and reggae while soprano singer Emma Nuule will open the main stage at 5pm, ahead of original British rock band The Hemingways and Flaming June, aka award winning songwriter Louise Eatock.