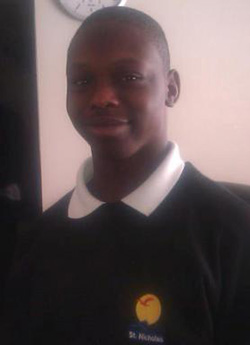 A DISTRAUGHT mother originally from Zimbabwe told her disabled son he was going to heaven before taking her own life and his on Southend seafront in the UK.
Cathy Mhlaba, from Shoebury, drove her 16-year-old son, Bheki Ali, to Thorpe Esplanade, Thorpe Bay, doused the car in petrol and set it alight with them both inside.
The 45-year-old church leader was depressed that her former partner had a new lover and Bheki, who had a mental age of six, was being bullied at Southchurch Vocational College, an inquest heard yesterday.
Coroner Eleanor McGann said: “There was an incredibly distressing phone call, at 5.25pm, by which time the car was probably on fire. Police had already been alerted. Catherine called her sister, Caroline, who did her best to stop her and talk her out of it.
“Caroline said Bheki didn’t deserve it, then had to phone Bheki and ask him to pass the phone to his mum.
“She heard Bheki say: ‘What’s going on mum? Where are we going?’ “Catherine said: ‘Don’t worry Bheki, we are going to heaven.
“Everything will be just fine.’”
Mhlaba, of Blyth Avenue, told friends and family she planned to kill herself and Bheki after confronting her former partner at his new girlfriend’s house two days before the fire, on December 3 last year.
She was struggling to come to terms with the end of their four-year relationship.
Then, hours before the tragedy, Southchurch Vocational College, based at St Nicholas Special School, in Philpott Avenue, called to say Bheki had suffered racist abuse on Facebook.
Detective Chief Superintendant Tracy Hawkings, the senior investigating officer, said: “That clearly distressed her.
“The school was taking it seriously and taking steps. A meeting was due to take place the following day to sort it out.”
Mhlaba and Bheki, who wanted to be a DJ, died from burns and smoke inhalation.
McGann ruled Mhlaba, who was secretary of the General Foundation Apostolic Church in Christ, in Chadwell St Mary, took her own life and unlawfully killed Beki.Advertisement