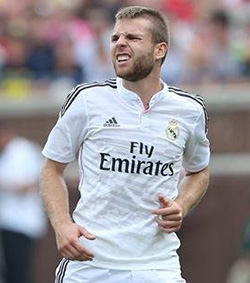 Manchester United to swap Di Maria for Cavani
LOUIS van Gaal has a big decision to take about Angel Di Maria, who failed to make the desired impact in a wretched second half of the season, and the Star on Sunday claims he will use the Argentina international as a lure to sign Edinson Cavani from Paris Saint-Germain. The Star claims it will be a straight swap with no money involved, reporting: “the United board do not want to sell Di Maria, 27, to either Barcelona or Bayern amid fears he will prove an instant hit for their rivals. Although he could be equally successful at PSG that would not be such a problem – as long as Louis van Gaal’s men land £50m-rated Cavani in return.”
Schneiderlin done, and two more to follow
The Sunday Mirror says Southampton midfielder Morgan Schneiderlin is to join Memphis Depay in moving to Old Trafford this summer with a £25m agreement now in place for the France midfielder after Ed Woodward met his agents in Paris on Friday. The Mirror then adds, “Now Woodward will turn his attentions back on Ajax by making a £20m move for keeper for Jasper Cillessen.”
The Sun on Sunday names another United target, with Everton right-back Seamus Coleman the man in question and described in the paper as the club’s “next big-money target”. The Ireland international will cost £20m if he does make the move from Goodison to Old Trafford.
City waiting on Pogba move

According to the Sunday Mirror, Manchester City are ready to pounce for Paul Pogba, but only after he tells them he is ready to leave Juventus. Should he do so, then a £71m bid will be made for the fantastic France international, who is generating the most excitement this summer. The Mirror reports: “City have also spoken to Pogba’s agent, Mino Raiola, and are prepared to pay the 22-year-old a staggering £240,000-a-week basic, plus huge bonuses. But City are holding back on making a bid to Juventus until Pogba tells them he wants to come to the Etihad. They do not want to be used as a bargaining tool by either Juve or the player to drive up offers from rival clubs.”
Reds move for Real star
The suggestion in the Sunday People is that Liverpool have given former boss Rafa Benitez a call and asked if they can sign midfielder Asier Illarramendi for £15m. The paper says: “Reds boss Brendan Rodgers saw a £10.6m bid for the 25-year-old knocked back but sources close to Real say the club have now received an offer of £15m plus add-ons. Liverpool are waiting for an answer but the player knows he does not feature in the plans of former Anfield manager Rafa Benitez, now in charge at Real after his switch from Napoli, and hopes he can seal a move to Anfield.”Advertisement

Liverpool eye Swedish talent
Not content with Illarramedi possibly becoming their SEVENTH signing of the summer already, Liverpool are also in for Sweden Under-21 star Ludwig Augustinsson, who the Mirror remind us described Gareth Southgate’s England as “overrated”. That’s enough to brand him “outspoken”, apparently, but the left-back who only joined FC Copenhagen in January is now being trailed by Brendan Rodgers.