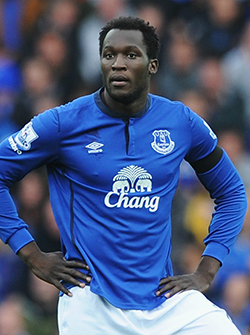 REAL MADRID READY TO SELL RONALDO: Cristiano Ronaldo could be on his way back to Manchester United, with Real Madrid president Florentino Perez willing to listen to offers for his star man. Metro carries a story originally reported in Spain’s El Confidencial, following Ronaldo’s 30th birthday and criticism over a party that came hours after a 4-0 defeat to Atletico Madrid. The conclusion is that, with Ronaldo’s value set to plummet as he enters his fourth decade, are prepared to cash their chips in and build a new team ‘without stars’.
LUKAKU WANTS OUT OF EVERTON: Romelu Lukaku is already looking to leave Everton for a “top club”, according to quotes carried by The Sun. Lukaku, a £28m record signing for the Toffees, appears to be planning his exit from Goodison Park. He said: “They know I’m a good player but that I want to develop so I can eventually get back to playing for a club like Chelsea. I don’t have a secret ambition to rejoin — there are other clubs in the world. I just want to grow as a player and eventually arrive at a top club again.”
QPR’S DREAM MANAGER IS… PAUL CLEMENT: The Guardian says that QPR will look to appoint Paul Clement as their manager at the end of the season after they gave the job to Chris Ramsey for the rest of the 2014/15 campaign. Clement is currently Carlo Ancelotti’s assistant at Real Madrid, and although he has never held a full manager’s post he comes very highly-rated. This follow’s Tony Fernandes’s assertion on Twitter that he was close to landing his “dream manager”.
PAUL LAMBERT ASKED VILLA TO SACK HIM: Paul Lambert asked Aston Villa owner Randy Lerner to sack him twice before the axe finally fell this week, the Daily Telegraph reports. Lambert’s frustration at the lack of resources made him beg Lerner to end his tenure, but he was convinced to carry on. Lambert was finally sacked on Wednesday in a phone call with chief executive Tom Fox, a decision that reportedly left him “bitterly disappointed”.Advertisement