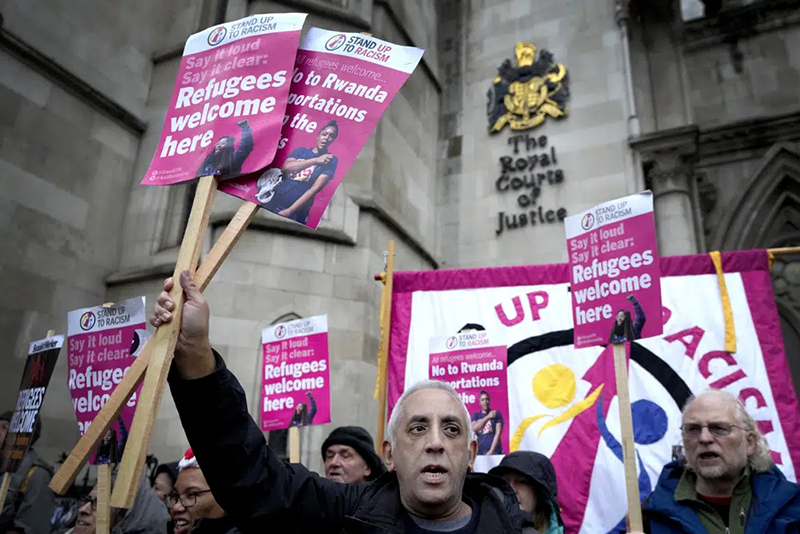 LONDON: British judges gave the go-ahead on Monday for the Court of Appeal to consider challenges to the U.K. government’s plan to send some asylum-seekers on a one-way trip to Rwanda.

Two High Court judges ruled in December that the controversial policy is legal, rejecting a lawsuit from several asylum-seekers, aid groups and a border officials’ union. The same judges said Monday that the claimants can challenge that decision on issues including whether the plan is “systemically unfair” and whether asylum-seekers would be safe in Rwanda.

No date has been set for the appeal hearing.

The Conservative government struck a deportation agreement with Rwanda last year that is intended to deter migrants from trying to reach the U.K. on risky journeys across the English Channel. More than 45,000 people arrived in Britain across the Channel in 2022, and several died in the attempt.

The U.K. plans to send some migrants who arrive in the country as stowaways or in small boats to Rwanda, where their asylum claims would be processed. Those granted asylum would stay in the East African country rather than return to Britain.

The U.K. government argues that the policy will deter criminal gangs that ferry migrants on hazardous journeys across one of the world’s busiest shipping lanes.

Human rights groups say it is immoral and inhumane to send people more than 4,000 miles (6,400 kilometers) to a country they don’t want to live in. They also cite Rwanda’s poor human rights record, including allegations of torture and killings of government opponents.

Britain has already paid Rwanda 140 million pounds ($170 million) under the deal struck in April, but no one has yet been sent to the country. The U.K. was forced to cancel the first deportation flight at the last minute in June after the European Court of Human Rights ruled the plan carried “a real risk of irreversible harm.”

Last month, the High Court said the policy didn’t breach Britain’s obligations under the U.N. Refugee Convention or other international agreements. But the judges added that the government “must decide if there is anything about each person’s particular circumstances” which meant they should not be sent to Rwanda, and had failed to do that for the eight claimants in the case.