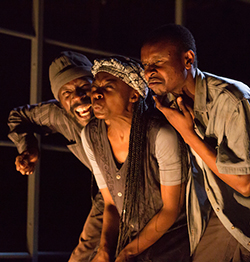 THE quest for liberation is popular dramatic terrain, but London’s Gate Theatre’s “Freedom Burning” season shifts focus to the aftermath.
What do you do when the fight is over, and how can you be sure the sacrifice was worthwhile? It’s a sophisticated – and, given the nature of modern warfare, highly pertinent – line of questioning, but Andrew Whaley’s richly allegorical play is ultimately too opaque to do it justice.
The Rise and Shine of Comrade Fiasco, produced in association with the National Theatre Studio,revisits 1986 Zimbabwe, where three strangers (Kurt Egyiawan, Joan Iyiola and Gary Beadle) are confined to a cell following a drunken bar fight.
They’re joined by a shivering, bewildered, animalistic man claiming to be a freedom fighter who spent seven years hiding in a hillside cave, unaware that the war for independence had come and gone. His inexplicable presence inspires his cellmates to retrace his steps and their own, letting the past flood into the present.
Whaley’s 1990 tale of a reappearing freedom fighter was inspired by a real story, but rather than interrogating the mysterious man’s identity directly, he uses this figure to examine the gradual dissolution of freedom – and subversion of its very notion – in post-colonial Zimbabwe.
His quartet wander into remembered and imagined pasts, tracing histories, constructing narratives, embodying and commenting upon multiple roles, and obliquely analysing the state of their nation.
This liberating, non-linear theatrical approach blends song, dance, slapstick, evocative lyricism and furious bursts of violence. The chaos mirrors post-revolutionary confusion, and the choppy chronicling illustrates the unreliability of one accepted history.
A strong cast demonstrates impressive range in embodying these various guises and switching between grounded realism and flights of fantasy.
Gary Beadle is a comic delight as roguish, animated Jungle; Kurt Egyiewan excels when disillusioned former freedom fighter Chidhina is forced to question whether his war is truly over; Joan Iyiola’s alter egos are sharply observed; and Abdul Salis does well to convey the emotional underpinnings of enigmatic Comrade Fiasco.
Rosanna Vize’s cage-like prison cell opens out into a rocky outcrop, which, with Elayce Ismail’s judicious use of lighting and sound cues, provides the backdrop for effective, fluid flashbacks.Advertisement

However, Whaley’s piece seems locked in conflict with itself, both arguing for the reclamation of history and identity, and suggesting it’s impossible to truly articulate someone else’s story, either an individual’s or a nation’s.
Fiasco remains more hazy myth than man, and the three prisoners’ life stories are relinquished in favour of heavy-handed religious allegory and philosophical meandering.
Neither naturalistic drama nor metaphorical exploration have enough space to develop in a 90-minute piece that feels simultaneously overloaded and incomplete – dynamic and engaging delivery, but the core concerns need more cogent elucidation.
This review was originally published by The Arts Desk.com