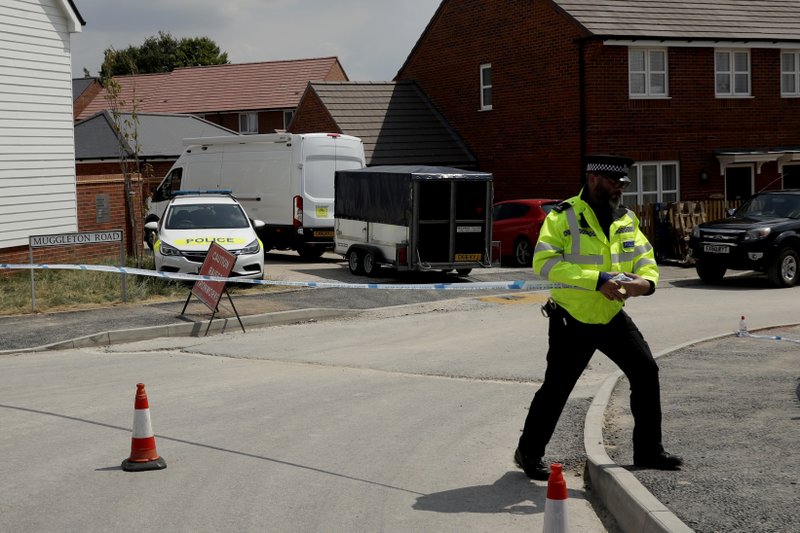 AMESBURY: British police scoured sections of Salisbury and Amesbury in southwest England on Friday, searching for a small vial feared to be contaminated with traces of the deadly nerve agent Novichok.

More than 100 officers were looking for clues in a race to understand how two local people were exposed to a nerve agent that was produced in the Soviet Union during the Cold War.

Police believe the couple may have come in contact with a contaminated vial or other item discarded in a public place after a March nerve agent attack on ex-Russian spy Sergei Skripal and his daughter, Yulia, in Salisbury. British officials blamed the Skripals’ poisoning on Russia. The Kremlin denies any involvement

The two new victims — Dawn Sturgess, 44, and Charlie Rowley, 45 — are in critical condition and were hospitalized Saturday after falling ill within hours of each other. At first authorities thought they might have had a bad drug reaction.

Ben Jordan, a friend, described Rowley as a scavenger who would pick up cigarette butts from the ground and often go through the trash cans outside charity shops in search of something he could use or sell.

“Anything and everything to sell, to survive, to use,” Jordan said. “What the charity shop doesn’t want, he will fix it or sell it or use it for himself.”

His habit raises the possibility that Rowley might have picked up a used receptacle or another type of contaminated item while rummaging through trash.

Experts say just a few milligrams of the odorless Novichok liquid — the weight of a snowflake — is enough to kill a person within minutes. But finding residue before it poisons unwitting victims is the problem.

Police in special protective gear and breathing apparatus are conducting an extensive search at the John Baker House in Salisbury, where Sturgess was living before the poisoning.

It is listed by the Homeless Link charity as a supported living situation for “single homeless people and those in a vulnerable housing situation.”

Its residents have been placed in other housing while the search continues.

Scientists say there’s no easy way to use technology to locate the container thought to be the source of the Novichok. Instead, there will have to be a laborious physical search of suspected sites.

Alastair Hay, Professor Emeritus of Environmental Toxicology at the University of Leeds, said there is “no specific method for the detection of Novichoks in the environment” because the use of the nerve agent was not considered likely when monitors were designed.

That means authorities will have to take soil and vegetation samples from sites where it’s possible the nerve agent was present and painstakingly test the samples to see if there is any contamination.

A number of sites are being searched in the town of Amesbury, where the couple fell ill, and the nearby city of Salisbury, where the Skripals were poisoned. Forensic searches were due to be carried out at the Amesbury home where Sturgess and Rowley collapsed, and other sites the couple visited before they were sickened.

British Home Secretary Sajid Javid told Parliament on Thursday that it’s time for Russia to explain “exactly what has gone on.”

“It is completely unacceptable for our people to be either deliberate or accidental targets, or for our streets, our parks, our towns to be dumping grounds for poison,” Javid said.