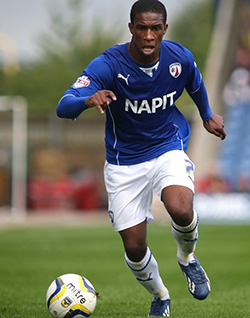 BURNLEY’S Zimbabwean born fullback Tendayi Darikwa has vowed to wrest back the right back position from Matt Lowton when the English Premiership kicks off next month.
Darikwa joined Burnley from Chesterfield for £650,000 last summer, and was an ever-present in the side until December, when fellow new arrival Lowton broke into the team.
And the former Aston Villa man retained his place for the rest of the season as the Clarets claimed the Championship title.
The Zimbabwean, who has been called to the Warriors before but is yet to turn up, returned for the FA Cup ties at Middlesbrough and Arsenal, but spent the remainder of the campaign on the bench.
However, he told the media in the UK that he was focused on pushing himself back into the side in pre-season.
“My aim is just to get back into the starting 11 and put in some good performances. For me, it’s about working hard and hoping I get a chance to contribute,” he said.
“I finished the season out of the team and my aim is to get to the start of the season fit and healthy and hopefully I can impress the manager.”

The 24-year-old enjoyed his first season at Championship level, and the experience of a promotion season, and is delighted with how things are going at Turf Moor.
“If you had told me a couple of years ago that I could be playing for Burnley, winning the Championship and getting promoted to the Premier League, I would have snapped your hand off.
“Obviously I was disappointed not to play every game, as a footballer you want to, but I’m at a good club with a lot of good players. The main reason I signed was to get promoted.2
Darikwa added: “Getting promoted was special. As a new player, I was pleased to be able to play a part.”
He now faces a new challenge, as one of the few players in the squad not to have experienced Premier League football, although he had a taste of what is in store in January at the Emirates.
Playing at venues such as Elland Road on his debut will also be a help, as he explained: “I had to learn to play against better players and improve technically (in the Championship).
“But I think I coped relatively well with the step up. Playing against Arsenal was nice, my first game at a Premier League ground and an FA Cup game too.Advertisement

“But making my debut at Leeds, away, stood out – I don’t think there’s any tougher first game in English football.
“At Burnley we have players who have been in the Premier League and last season we had Joey Barton, someone who has played at the highest level for a number of years – you do learn little bits off them.
“We’re a confident group and a close group and we believe in ourselves.”